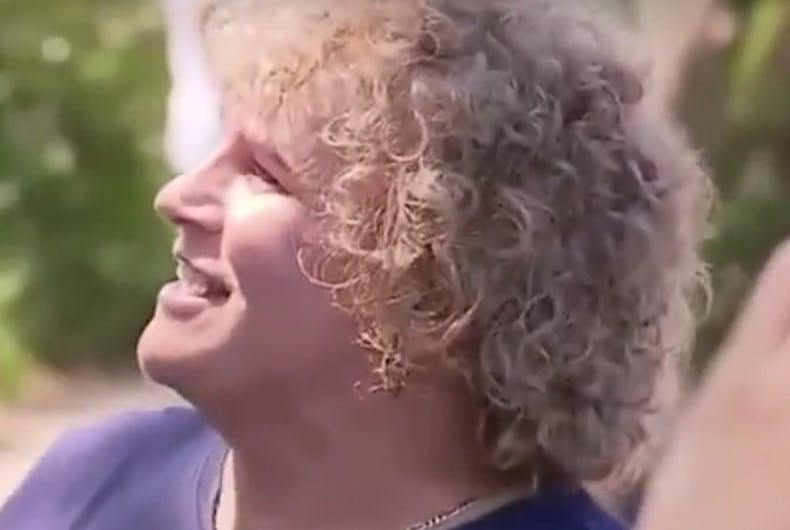 Senator and rightwing leader Cory Bernardi is one of Australia’s most anti-transgender politicians.

In 2015, he retweeted a meme of a cat with the caption “It’s oppressive to call me a feline. I actually identify as a German Shepherd.” Bernardi wrote in the since-deleted tweet, “The new ‘right’ is the right to choose your own reality or deny it completely.”

He once wrote on his website that transgender equality is “Marxist social engineering.”

So when transgender activist Julia Doulman saw him giving a press conference yesterday outside of a school, she decided to give him a piece of her mind.

“My name is Julia, I’m transgender,” she said, interrupting Bernardi. “I’m not what you guys think, all you religious nutters.”

She pressed on, and Bernardi tried to get her to go away while staying polite for the cameras. The tension rose, but Doulman was not deterred.

Before leaving, she said, “We don’t all screw cats.”

That last line may have been a reference to when Bernardi compared homosexuality to bestiality.

Doulman is no stranger to the public eye. In 2003, she was the subject of a documentary entitled Becoming Julia.

Earlier this year, Twitter erupted in laughter when Bernardi covered his face to avoid appearing in a photo of marriage equality activists.

Conservatives freaked out over a student’s rainbow. So his school ended a tradition.