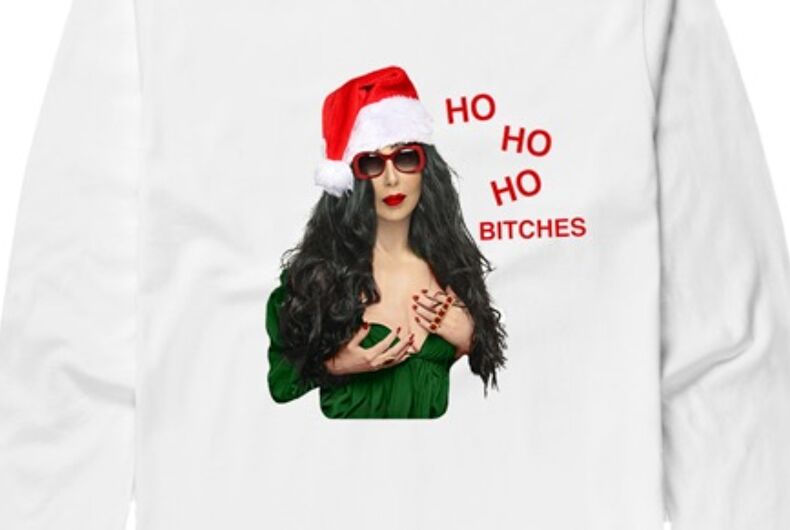 Perennial queer icon Cher has just released a new line of merchandise aimed at the holiday season, because of course she did. She’s Cher.

Like Donald Trump, Cher spends a good deal of her time tweeting. Twitter also served as the genesis for her new product line—holiday themed merchandise featuring Cher herself.

Apparently the idea came from fans suggesting that Cher do a line of ugly Christmas sweaters several years ago. The singer and Oscar-winning actress, who actually has knitted several ugly sweaters herself, took the suggestion to heart. No doubt fans of the iconic singer would love to Cher the love for the holidays.

Cher took up knitting in the early days of her film career. Shooting a movie involves lots of downtime, so Cher thought she needed something to keep herself sane. She ended up knitting stockings for her kids, Chaz and Elijah, as well as a hideous sweater for her husband Don. The stockings have since become a holiday tradition in her family, one which Cher wanted to share with the public.

Her new merchandise line features some tasteful products, like a tree ornament with Cher on it, as well as some very ugly holiday attire. Along with her new line of holiday swag, Cher has only one Christmas wish this year: to see Trump in handcuffs next year!

We can’t say we blame her on that one.

A masked man attacked an LGBT center in D.C.

How the ‘Christian machine’ destroyed an evangelical writer who denounced Trump