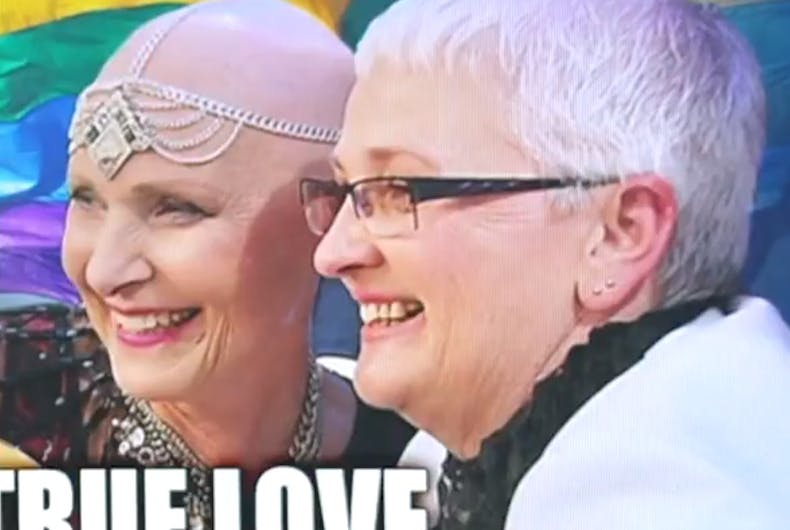 Cas Willow, 53, and Heather Richards, 56, have been together for seventeen years, and they were in a race against time to get married.

Normally Australians have to wait a month after registering to marry, but Cas and Heather got a waiver for the waiting period. Cas’s breast cancer had spread to her brain, and she was told that she might not see Christmas.

“Just because time is not on our side, it’s just a dream come true,” Cas said about the wedding.

Cas and Heather were married at the Peter MacCallum Cancer Centre, a place that the couple had spent so much time at for the previous year and a half. The clinic’s staff and suppliers donated supplies like rings, cakes, catering, and a photographer.

Cas wore a vintage dress and a headpiece as she was wheeled in by Heather to John Legend’s “All of Me.”

Just before the ceremony started, Heather joked to the officiant that most people only ask their parents for permission to marry, but they had to ask 22 million people, a reference to the postal referendum that led up to the passage of marriage equality.

Heather said, “She has always been there for me, she’s been my partner in life, my confidante, my soul mate, my everything.”

“To now be able to carry on afterward and say she was my wife and not just my partner, it adds sort of completion to a relationship.”

One of Australia’s first same-sex weddings has been held, at the Peter MacCallum Cancer Centre. #9News pic.twitter.com/Fd0NrrOUBW

Who will be LGBTQ Nation’s 2017 Newsmaker of the Year?