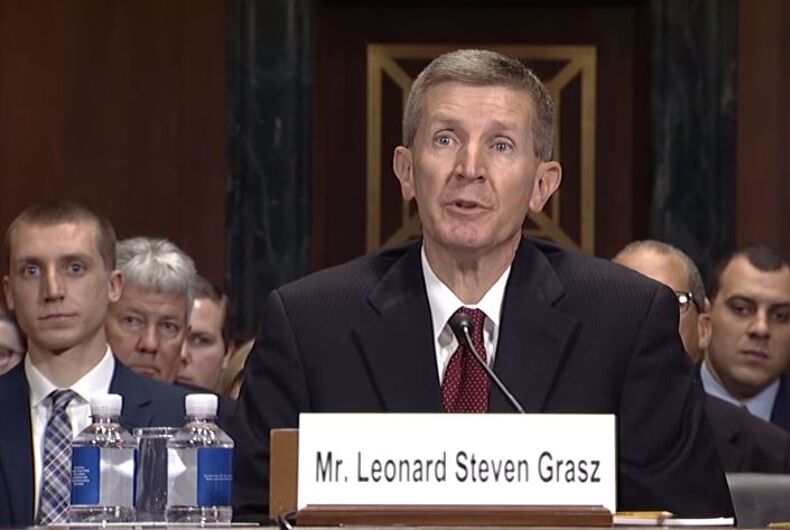 Leonard Steven Grasz has been confirmed by the Senate in a partisan vote.Photo: Screenshot

Another of President Donald Trump’s questionable nominees has been given the go ahead by the Senate.

The Senate confirmed Leonard Steven Grasz, who goes by his middle name, to a lifetime appointment to the U.S. Court of Appeals for the Eighth Circuit.

Grasz passed with a vote of 50-48, all Republicans voting in favor, aside from Sens. John McCain and Thad Cochran who did not vote. All Democrats and Independents voted against.

Grasz was rated “not qualified” by the American Bar Association.

“In sum, the evaluators and the Committee found that temperament issues, particularly bias and lack of open-mindedness, were problematic,” said Pam Bresnahan, chair of the ABA’s committee responsible for reviewing nominees, in a statement.

“The evaluators found that the people interviewed believed that the nominee’s bias and the lens through which he viewed his role as a judge colored his ability to judge fairly.”

Also of concern is his position as a board member of the Nebraska Family Alliance, a far-right, anti-LGBTQ group that has opposed marriage equality, bans on the dangerous and debunked practice of so-called conversion therapy, and nondiscrimination ordinances.

“After a comprehensive review of his record, we have concluded that his views on civil rights issues are fundamentally at odds with the principles of equality, liberty, justice and dignity under the law, particularly with regard to LGBT Americans, and that he will not be able to overcome his personal beliefs when asked to administer fair and impartial justice,” it reads.

“We are convinced that Mr. Grasz is demonstrably unqualified for a lifetime appointment to the federal bench.”

“It is exasperating, and yet unsurprising, that Senate Republicans could not even bring themselves to oppose a Trump nominee that received a unanimous ‘not qualified’ rating from the non-partisan American Bar Association,” said Lambda Legal director of strategy Sharon McGowan.

“The total disregard for those most vulnerable in this country — those who depend on a fair and impartial judicial system to protect their basic rights — was on full display today by each Senator who voted to hand a lifetime appointment to Steven Grasz to the Eighth Circuit, where he will wreak lasting damage on civil rights for generations to come.”

Another of Trump’s judicial nominees has been rated “not qualified” by the ABA, Brett Talley, who was nominated to become a federal judge in Alabama, but was pulled from consideration today.

Republican Sen. Chuck Grassley advised the administration to back away from Talley, as well as Jeff Mateer, who is nominated for a federal judgeship in Texas. Mateer has called trans kids “Satan’s plan” and has also worked to allow states to subject people to conversion therapy, and has fought nondiscrimination ordinances. He has yet to come before the Senate Judiciary Committee.

McGowan gave Grassley credit for “rightfully and finally” urging Trump to reconsider the nomination of Mateer, but added that he “must also take accountability for all the Jeff Mateer-quality nominees he’s been jamming through the confirmation process, including Steven Grasz today.”