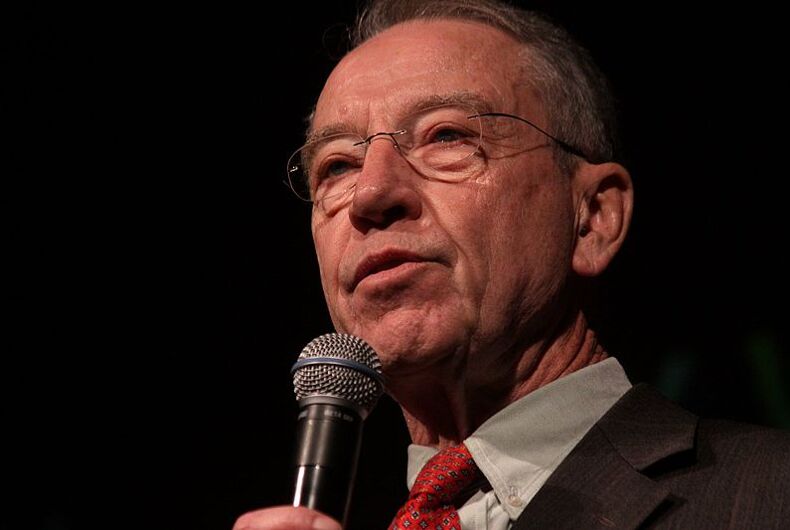 Sen. Chuck Grassley has asked the Trump administration to rethink a pair of judicial nominees.

Grassley made his comments to CNN, and also said he advised the administration to “not proceed” with the nomination of Brett Talley, nominated to become a federal judge in Alabama. It is a rare rebuke from a senator who is almost always aligned with Trump.

Mateer is up for a federal judgeship in Texas, and he is anti-LGBTQ even by Trump nominee standards. In addition to his anti-trans youth statement, he has come out against states banning so-called “conversion therapy,” colloquially known as “pray the gay away.”

Grassley offered no specifics as for his recommendation to steer clear of Mateer and Talley, who has never tried a case and who was unanimously rated as “not qualified” by the American Bar Association.

White House Press Secretary Sarah Huckabee Sanders said Tuesday she was “not sure” if Grassley and Trump had spoken directly on the issue, and would not answer whether or not the president would rescind the nominations.

The Washington Blade has attempted to gain clarification, so far to no avail.

“We hope this will be a turning point, and we call on Chairman Grassley and other senators to reconsider these nominees as well, and to return to regular order in the Senate rather than rushing through extreme and unqualified nominees,” said Harper Jean Tobin, director of policy for the National Center for Transgender Equality, calling Mateer and Talley “just the tip of the iceberg.”

UPDATE: The White House has pulled Talley from consideration.