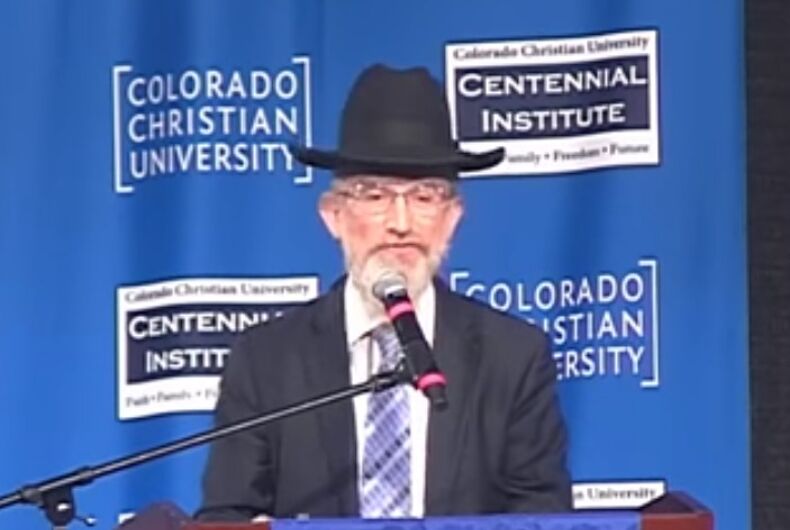 Phillips is the owner of Masterpiece Cakeshop and has gotten national attention for his refusal to bake cakes for gay people’s weddings. While he insists that his “no gay weddings” position isn’t homophobic, the people supporting him haven’t gotten that memo.

One of the speakers at the rally was Rabbi Yaakov Menken of the Coalition for Jewish Values, a conservative organization. He was explaining how courts are punishing Phillips for “discriminating against what the Bible calls abomination” when he started on a rather tortured analogy:

If space aliens were to land tomorrow, they would solve the problem. Now some of you probably think I’m nuts, but let me explain. Let’s imagine E.T. lands tomorrow and someone falls in love with E.T. and decides to get married to ET. Trust me – within two years the Supreme Court would decide that under the US Constitution Sally – or Bill – could get married to E.T.

But because aliens are not human beings, and despite what you’ve seen on Star Trek, it would be impossible for aliens and humans to have children together – that would be the Biblical definition of marriage – and Jack Phillips would not be able to bake them a cake. And then it would be obvious that he’s not discriminating against anyone. He’s not singling out same-gender couples for exclusion. On the contrary he is saying he can only celebrate a Biblical marriage that involves a human man and human woman. And the ACLU would have to pack up and go home. Are your lawyers taking notes, Jack?

If space aliens were to land tomorrow, something tells me that “Can they legally marry humans?” would not be the first question on anyone’s mind.

Menken’s argument appears to be that we need an alien to come to Earth so that Phillips could discriminate against a human-alien marriage, which wouldn’t be a real marriage because they couldn’t produce children. That way, we would have proof that Phillips isn’t homophobic since he is discriminating against all marriages that can’t produce children.

The underlying assumption is that same-sex couples are currently the only couples that cannot have children, which is silly to the point that I wonder how any adult could believe that. Has Menken just not heard that many straight couples can’t have children? Or don’t want to have children?

Since Phillips wasn’t asking for proof of fertility from straight couples who wanted to buy cakes from him, I doubt that his position has much to do with fertility.

Phillips was present at the rally, as was the Alliance Defending Freedom, which is an SPLC-designated hate group.

Which is just a coincidence, I’m sure, since Phillips insists that he isn’t homophobic.

A lesbian was badly injured after 5 men brutally beat her