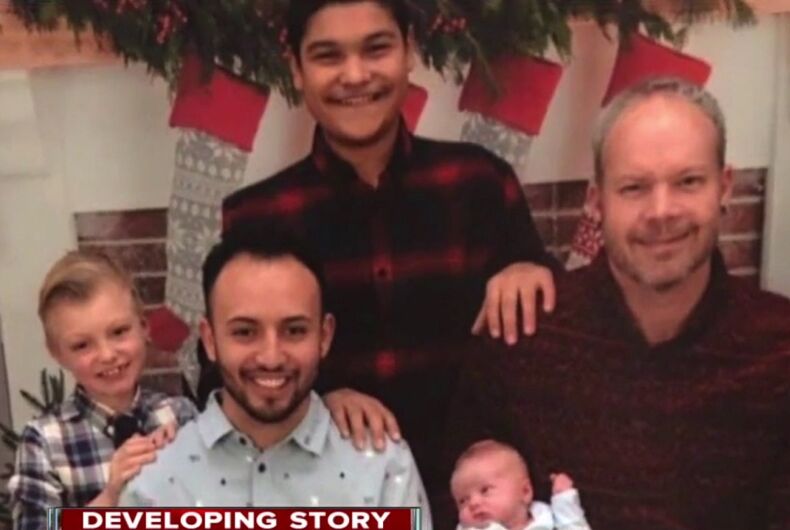 Jason (right) and Alan (second from left) with their three children.Photo: Screenshot/RTV6

Jason Doan, 45, was a husband and father of three when he died saving his family from his burning house.

He and his husband Alan Marin woke up during the night on November 2 to find their Indianapolis on fire. Flames were blocking the only exit, and Jason helped Alan get their 11-month-old and 10-year-old children out the window.

“He pushed me through the window, passed me the kids, and he said get out, get away from here and he saved me,” Alan said.

Jason, though, succumbed to the fire and was later pulled out by firefighters. He died in a hospital two days later from burns and smoke inhalation.

Outside of the home, Alan noticed that their car was gone and that their 16-year-old son, Jordan Marin-Doan, was missing.

Police found the son two days later in another city, where he admitted to starting the fire. He said that he poured fuel on the stairs and ignited it with a lighter, which was corroborated by physical evidence at the house. He said he immediately regretted doing it and fled in the car.

According to court documents, a witness said that Jordan repeatedly threatened to kill the entire family so that “he could get a cell next to his biological father in prison.” When police found Jordan, he said that he didn’t know why he started the fire.

Jordan is being tried as an adult and has pled not guilty to charges of arson and murder.

“He had a heart of gold, he did something nice for someone every day,” the sister said.

“He saved me and my kids,” Alan said. “He gave his life for us, making sure we were OK. He got me out with my kids and told me to take them to a safe place. That was his priority – our kids – making sure they were safe.”

Rabbi says that gay people are like ‘space aliens’

Belgrade Pride: Authenticity in the face of violence