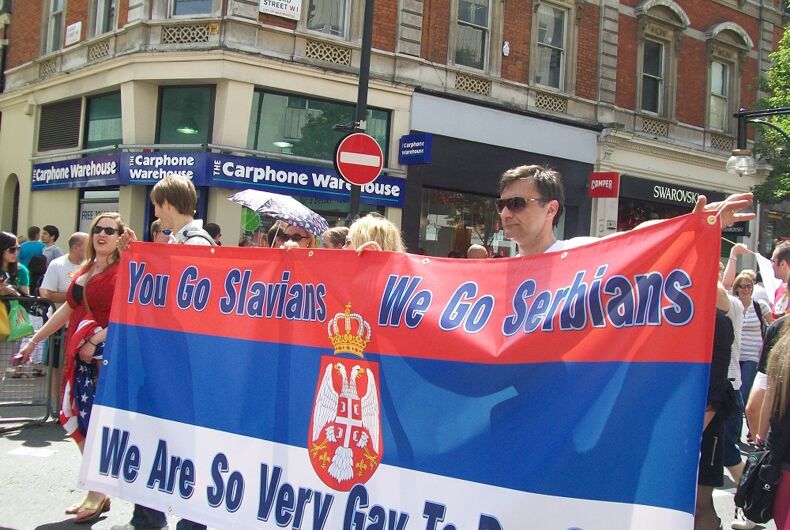 The Serbian contingent at Pride in London in 2010.Photo: Flickr/@anemoneprojectors

A thin, handsome man in his early 30s smiled shyly, took another sip of beer and talked about how he loved the smell of men. Laughter erupted from the others at the table as another said, “God, yes!”

“I’ve never said these things aloud to another person,” he said, his voice dropping. “It feels… good.”

The setting could have been an American consciousness-raising group out of the 1970’s, pioneered in large part by the second wave of the American women’s liberation movement. However, it was Belgrade, Serbia, 2017 at a smoky neighborhood café called Meduza with a reputation for progressive politics and whose Serbian internet password translated roughly to “Death to Fascism,” and I was the facilitator.

I traveled to Serbia in September as a guest of the Civil Rights Defenders, one of the leading proponents of human rights in Europe and a principal partner of Belgrade Pride. I had attended the previous year, and was touched by the courage and commitment of the people I met, including LGBTQ rights activist Boban Stojanović, who would later seek and receive political asylum with his partner Adam Puškar in Canada just a few months later. He told me he could no longer tolerate repeated episodes of gay bashing, as one of the country’s few openly gay men.

I proposed facilitating a series of queer cafés this time to offer focused conversation and organizing among different demographics in the LGBTQ and allied community on individual nights. Gay men, lesbians, bisexuals, transgender, gender queer or fluid and allies would all have their own sessions although they were also free to visit each other’s.

I led each group through different ice breakers and urged that we use our time intentionally to really share and get to know each other.

“Let’s pretend that it is six months or a year from now,” I said. “We have already had coffees or dinners and maybe gone drinking together. Maybe we have had our hearts broken or comforted each other. What would it look like if we could skip over that initial shy space and really talk?” I asked. “Do you want to go there with me?”

Perhaps hungry for authenticity, somewhat remarkably, everyone agreed. And so we created an informal contract with each other to risk and go deep, talking about desire, and family and the workplace and isolation and connection. About what the reality and the possibilities were for our LGBTQ lives.

The events were promoted by several of the partnering Pride organizations including a new advocacy group called Da Se Zna.

It was one of the first times that many of the people from these various groups have gathered and after our lesbian group met, I suggested creating a Facebook group to stay in touch with each other and gather for additional social occasions.

“I surprised myself coming,” said a young lesbian who recently graduated from college. “I didn’t know what to expect. But this feels safe,” she said.

Well, it was mostly safe. Whether it was literally needed or not, we had both visible and undercover police protection. At one meeting, a café worker apologetically urged us to remove our rainbow flag that we were using to mark our table so participants could identify.

Belgrade Pride has a shocking history of violence. The first Pride march, organized in 2001, with activists from multiple groups, ended in violence from far right nationalist agitators and efforts to plan another Pride were suspended for eight years. In 2009, the government banned Pride as a security risk.

The volunteer organizers prevailed but Pride 2010 resulted in more violence. More than 100 arrests were made and over 150 people were injured. The violence perpetuated by the Alt Right was exacerbated by an insufficient police force and the abuses against members of the LGBTQ community went unpunished by an unsympathetic government.

The response of the government was to ban Pride itself again in 2011, 2012 and 2013. These bans were later declared unconstitutional by the Constitutional Court of Serbia.

Pride 2016 mostly went off without a hitch although a visiting American gay male friend wearing a rainbow tee shirt was harassed towards the end of the march by a member of the Greek Orthodox Church who was wearing a prominent cross.

The progress has been steady. This year’s Pride Week program had over 50 events and the parade attracted an estimated 2000 attendees, with the smallest number of police yet guarding the parade, 2000. In 2014, there were 7,000 police in attendance. Compared to the Pride festivals of past years, 2017 was a huge success.

This Pride marked the crossing of frontiers and many firsts, including the opening of the first popup Pride Info Centre. Goran Miletić, the director of Civil Rights Defenders for Europe, noticed the vacant storefront on a central avenue in Belgrade, and rented the space. Over six days, the volunteers transformed it into a vibrant community space with a rainbow mural across the walls, charting the often bloody but important history of Prides and LGBTQ rights in Belgrade.

Attracting an estimated 3000 visitors, the center had 24 hour security, and good outreach to area policemen as well, who stopped by to grab a coffee. This was also the first time a Pride-related event was held in a government building, the largest government building in Europe, the Palace of Serbia. It hosted the International Conference on Hate Crime and Hate Speech, a crucial event that featured LGBTQ advocates from police forces and legislative interest groups across the European Union. A huge leap to officially legitimizing the LGBTQ community in the eyes of the government, this event was unimaginable two years ago, but a potential turnaround has taken place with the election of Ana Brnabić as Prime Minister and Serbia’s first openly Lesbian elected official.

Brnabić caused a sensation when she showed up at Pride to signal her support. In a recent Guardian interview in July, she emphasized that the causes of much of the intolerance from a ‘loud minority’ in Serbia are overarching problems that affect many minority groups. She called for patience and understanding, from the LGBTQ community as well, saying that change does not happen overnight.

Indeed, recently, a man was gay bashed at 5 a.m. in Belgrade, allegedly because he was working in a gay club. Local activists are waiting to see what actions elected officials will take, wondering if Brnabić’s election is window dressing or signals real change.

The situation for LGBTQ people in Serbia is as complicated as the history of this ancient region. While homosexuality is not criminalized in Serbia as it is in over 70 countries throughout the world, there is little prosecution for hate crimes and many people are afraid to be open for fear of retaliation in their personal lives or towards their families.

Nevertheless, Miletić and other committed activists continue in the pursuit of justice and equality. Belgrade Pride Week 2018 is scheduled for September 10-16 with its march on the books for Sunday, September 16th.

As the sun sets on the Pride celebrations in the US and a time in which many were mired in controversy around the growing corporatization, we would do well to examine the role and significance of Pride in other countries and to ask how we might support our LGBTQ sisters and brothers in Serbia and elsewhere.

A teen was stripped and beaten in a horrific attack