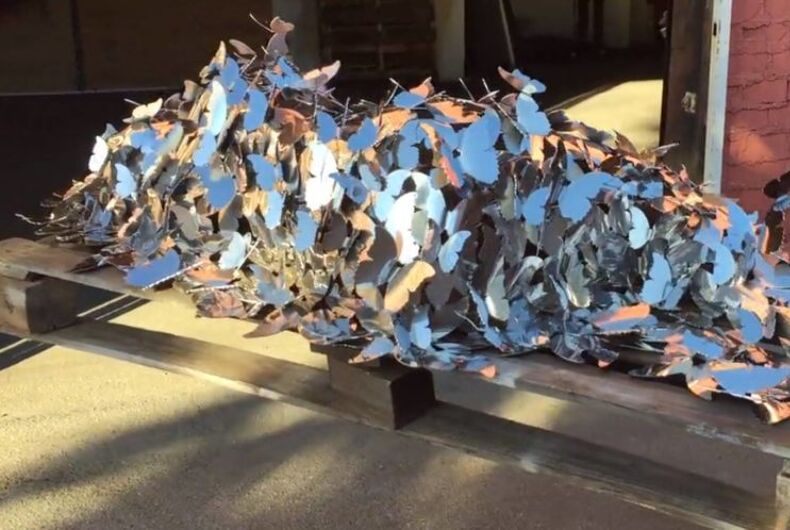 Transgender Day of Remembrance (TDoR) memorials will be taking place all over the country today, but there is a very special one in Southern California making history

The Transgender Community Coalition of Palm Springs commissioned L.A. artist Heath Satow to create a life-size cenotaph sculpture which will be unveiled during the memorial at Palm Springs City Hall on Monday.

The memorial is made up of many silver butterflies which symbolize metamorphosis and outline a human form lying on its side. This idea was inspired by murdered trans woman Yaz’min Sanchez who was shot then set on fire behind a garbage bin in Florida.

Founder of TDoR, Gwendolyn Ann Smith, will speak at the unveiling. She says the message the statue represents is why she chose to be at this specific event.

“It is such a powerful and emblematic image, honoring the many we’ve lost to anti-transgender violence, and showing that there remains hope even in the darkness,” she says. “It is such an evocative and touching piece. I’m deeply moved to be able to be a part of this particular event.”

Transgender Day of Remembrance events such as the one in Palm Springs have grown since Smith started it to honor her fallen trans sister, Rita Hester, in 1999. Smith never expected people would embrace TDoR; she feared her voice would get lost in the void so many years ago.

“I really had no idea it would become what it has,” Smith said. “I think that speaks to the continuing need to bring attention to the issue of anti-transgender violence and, by extension, the needs of the transgender community within a society that is so often hostile towards us.”

Thomi Clinton, Chief Executive Officer and founder of the Transgender Community Coalition in Palm Springs reminds people that trans folks have more to fear than perhaps anyone else,

There have already been 25 reported murders within the transgender community in the U.S. in 2017.

Smith says these tragedies should not be ignored and people outside the LGBTQ community need to start having a dialogue about the epidemic.

“Perhaps, more than ever, we need to have this conversation, and make it clear that transgender people deserve the right to exist.”

Transgender Day of Remembrance in Palm Springs will take place at Palm Springs City Hall on Monday, November 20 from 3 pm to 8 pm with the vigil commencing at 5 pm.

Are mostly straight men their own sexual orientation?