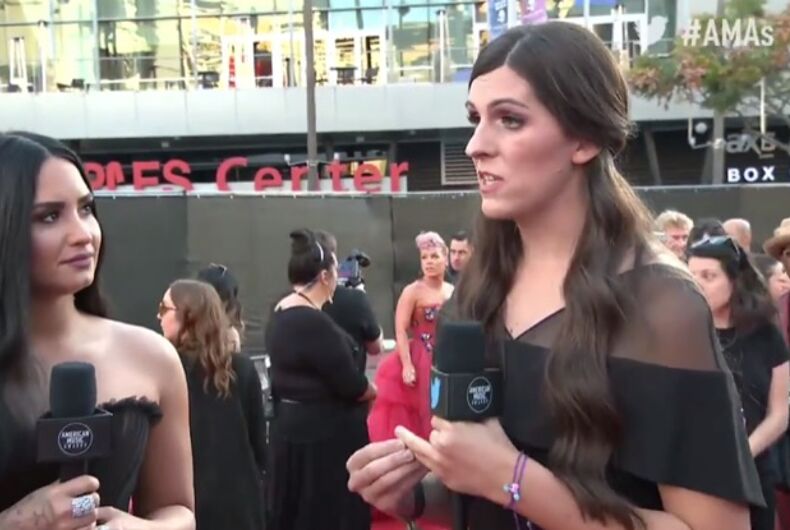 Demi Lovato and Danica Roem walk the red carpet at the 2017 AMAs.Photo: screenshot

Demi Lovato may have recently come out as bisexual, but the singer’s greatest hit with the LGBTQ community may be her date to the 2017 American Music Awards. Danica Roem, who made history as America’s first out transgender legislator, walked the red carpet with Lovato  as the duo called on Americans to stand united against discrimination.

“Such an honor to have Danica Roem who will be the first out and seated transgender state legislator in U.S. history by my side tonight at the AMAs,” Lovato wrote on Twitter. “Danica put up with a lot of hate and bullshit by people who said she couldn’t win but she did.”

Roem sat next to Lovato in the audience and as the singer’s time to perform her single “Sorry Not Sorry,” she stayed in her seat as hateful and deplorable tweets flashed across the on-stage screen. As the montage wrapped up, she casually strolled to the stage to preach a simple message to those watching on television.

“There’s so much hate in this world. We have to rise above, and never say sorry for who you are,” Lovato said, before beginning the song.

“Demi Lovato and Danica Roem are two strong and inspirational women who embody the need for all Americans to stand together united and to take action today against any form of discrimination and oppression,” GLAAD President and CEO Sarah Kate Ellis said in an emailed statement.

“Danica Roem is a trailblazer whose win in Virginia showcased both how young people and marginalized communities can impact voting results and how every American deserves an opportunity to work hard and achieve their dreams. Demi Lovato continues her legacy of raising the bar for entertaining audiences around the world and for spotlighting social issues that need the most attention.”

Lovato has been a staunch supporter for young people and the LGBTQ community throughout her career. She loudly protested North Carolina’s anti-trans HB-2, which would endanger transgender people by forcing them to use restrooms that did not match their gender identity.

I'll always stand for inclusion & against bullying. Demi Lovato's performance tonight made it clear that's where she stands too. Thank you for the once-in-a-lifetime opportunity @ddlovato.
PWC folks: I'll be back bright & early Monday to talk education policy. See you soon! #NoH8 https://t.co/6BJzz5xhNp