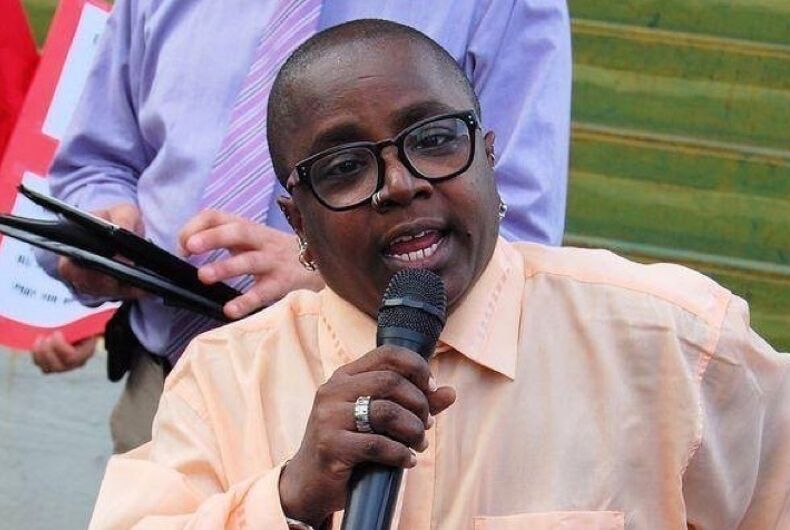 Editor’s Note: Bishop Mahee was a contributor to one of the original LGBT blogs, the Bilerico Project (now merged with LGBTQ Nation). Mahee, a transgender man from south Florida and force of nature, died last night. His was the last candle blown out during Ft. Lauderdale’s Trans Day of Remembrance ceremony. In honor of Mahee, we are reprinting this short essay he wrote for Bilerico in 2008 as Florida was debating Amendment 2 – the constitutional amendment to ban same-sex marriage.

As I departed from a Democratic Party meeting, I was approached by a community activist named Ari Mendel, who thanked me for the presentation I had done at his democratic club. He went on to explain to me that the reason he – as a straight Jewish man – was committed to defeating Amendment 2 was that he saw the same eroding of Civil Rights during the Civil rights movement.

In fact, he said that if he had not had other responsibilities, he would have taken a trip in the summer of 1964 to the south in his youth to register voters at the request of his friend Andrew Goodman.

That’s right- the very trip that ended up costing Andrew Goodman his life when he was lynched along with two other co-registrars Michael Henry Schwerner, and James Earl Chaney. The triple terroristic homicide would come to be known as Schwerner, Goodman, and Chaney.

What has always been interesting to me, given the fact that only one of those men was African-American (Cheney), was the fact that Schwerner and Goodman took on an issue that on the surface had nothing to do with them- having to have been keenly aware of the hostile territory they had been dispatched to as Americans in America.

What makes me grateful for theses heroes is the fact that they were not conformed to the logic of this world – the logic that said this was a “black issue” – but rather they were transformed by the revelation that what we give to another we give to ourselves, and likewise what we keep from another, we keep from ourselves.

As Ari and I stood there exchanging words, I had to ask myself where are the Goodman’s? Those people who see an injustice that may not seem to affect them directly but they roll-up their sleeves, get in the trenches, and place their privilege and their very lives on the line. Where are the people that question what their church, parents, and community say about “those people” and move in the conviction of doing what must be done?

See, I had been at the meeting to collect statements from individuals expressing their opposition to Amendment 2. I had a reality check when I approached an elected official and a candidate for elected office and was told that these two Democrats could not publicly take a stand on this issue. The candidate went so far as to say to me that they could only take a stand “after my election”.

Well, the obvious went through my mind- which was that it would be too late. Can we imagine if the freedom riders had resolved amongst themselves “we’ll go down south when those white folks are not so angry”? No, they understood that the reason to go was because it was not safe for the people living under the terroristic regime of the south.

The amendments targeting the LGBT community in Florida and California are bigger than these 2 states. I believe that it is going to take us finding the spirit and courage of the Goodman’s and Schwerner’s to understand that we must be willing to stand publicly and boldly when any human being is being targeted and denied their certain inalienable rights.

John Brown did is as a white abolitionist seeking an end to slavery, Frederick Douglass did it as man of African descent who felt as a suffragist that women should have the right to vote, and of course Goodman and Schwerner did as civil rights activist believing that Negroes (as African-Americans were called at the time) should have the right to vote.

We must be the Goodman we seek in the world.

Continue to walk in the light, redefine your faith, and remember it’s all about the rhythm.

We lost an amazing person tonight. I've had the honor to know Bishop S. F. Makalani-MaHee for a little more than 12…

It is with heavy heart that it has been confirmed that Bishop SF Makalani-MacHee passed. I'm still honored to take this…