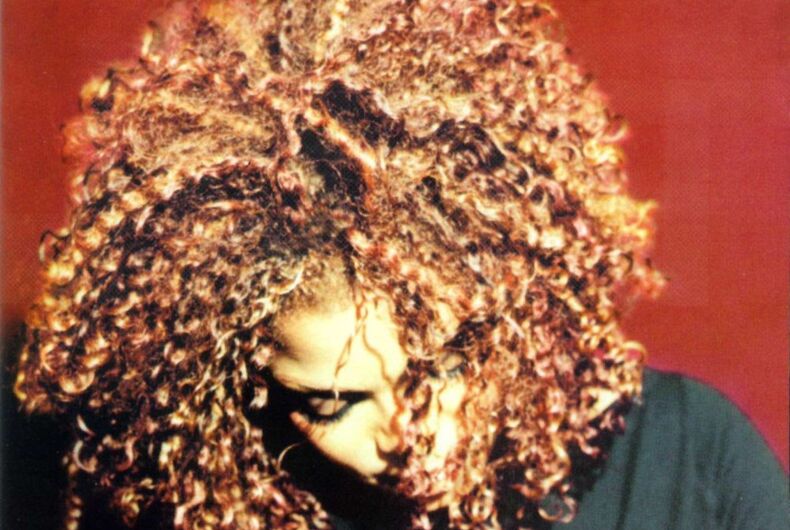 I’m sorry if this makes you feel old, but it was 20 years ago last month that Jackson released Velvet Rope, an album about intractable longing that showed the singer was still in control — not only of her voice and her brand, but of what was right and wrong.

Just as 1993’s janet. advanced the national conversation about safer sex, so did Velvet Rope help breakthrough taboos surrounding gay issues. The singer calls out homophobes and celebrates gay and lesbian love on the track “Free Xone,” and the reliable tearjerker dance jam “Together Again” goes out to friends Jackson lost to HIV/AIDS.

“I wanted something that sounded like Donna Summer, that had the melody that makes you feel good inside and that had the character of my friends who passed away from AIDS,” Jackson explained at the time.

Elsewhere on the album, Jackson’s cover of Rod Stewart’s “Tonight’s the Night” hints at her own potential sexual fluidity, as does an interlude in which she has phone sex with another woman. Though Jackson later clarified that she’d never made it with a woman — “Am I curious? I think every girl has wondered, more so than a guy. A girl can go there. But I never have,” the sheer possibility that an enormous pop star like JJ would dabble in Sapphic love was titillating, to say the least

Velvet Rope’s subject matter and the star’s frankness off and on stage were revolutionary for the era. Ellen had only just come out six months earlier; George Michael hadn’t yet, nor had Ricky Martin. The A-List of out gays was short and sweet.

Beloved mega-star Janet Jackson’s voice, both actual and symbolic, mainstreamed the conversation. While Madonna had long been a champion of inclusion, the divisive singer wasn’t nearly as palatable to broad swaths of America as Janet Jackson, she of musical royalty. When Janet, sexy but wholesome, exciting but never dangerous, talked, people listened.

The list goes on. And it does so thanks in part to Jackson. Mainstream society and, for that matter, record labels, would never have accepted these artists’ romantic perspectives had artists like Janet Jackson not sung their praises first.

Now, of course I know Janet was not the only voice in the long road to acceptance, and, duh, actual out queer folk deserve the most major of kudos — notables like Ellen, Elton, Neil Patrick Harris, Wanda Sykes, to name a few — but straight allies have been and always will essential players in the fight for progress and, with conservatives in Washington, they’ll be essential for holding our ground. Luckily Janet will be right there alongside us.

As she told the crowd when accepting Out Magazine’s Music Icon award earlier this month, “Differences are beautiful, diversity is a gift. We’re all different, we’re all the same, we’re all vulnerable, were all in need of acceptance and encouragement.”

Where are all the good men when we need them most?