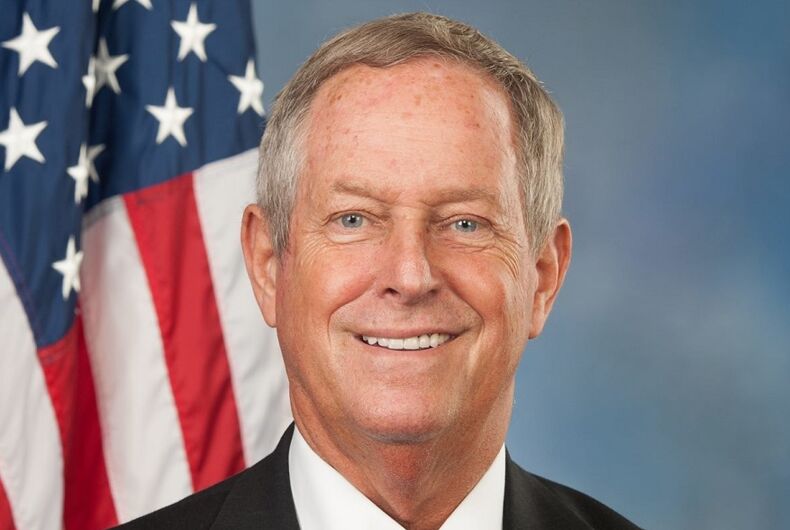 Note: This article contains strong language. Also, the identity of the intern has not been made public due to privacy concerns.

The Washington Blade has an interesting story about three gay men who decided to investigate a man who was sending racist messages on Grindr. They found that he was a Trump supporter and an intern for Representative Joe Wilson (R-SC), an extremely anti-LGBTQ lawmaker perhaps best known for shouting “You lie!” at Barack Obama during the 2009 State of the Union address.

On November 9, a Grindr user with the handle “TGIF” sent a racist message to a gay, African American, former Marine who lives in D.C., Rashad Humphries.

Humphries then gave TGIF a wonderful gift: the gift of honest criticism. “Bro you think using nigga in any context would make a black person want to fuck you? Get the fuck outta here with that racist shit.”

TGIF didn’t take that too well, so he just responded with one word: “Nigger.”

Grindr indicated that TGIF was less than 500 meters away, which meant that he was in the vicinity of Capitol Hill, where Humphries, who is an administrative specialist for the U.S. government, lives.

“I became upset, more so annoyed,” he told the Blade. “I wanted to find out who he was because the communication between me and him was obviously negative at best.”

He took a screenshot and showed it to his boyfriend Joel Garcia, 27. “It becomes personal and I don’t experience that that often, so just seeing that from an outsider’s perspective really hit a chord with me,” Garcia said.

He also showed it to a white friend, Matt Curtis, 39. Garcia and Curtis decided that they wanted to meet TGIF. Both of them sent messages to TGIF and had nicer conversations with him than Humphries did.

“My sole motive was try to find out who this person is,” Curtis said. “That person had a totally opposite conversation with me. It was very nice.”

He got TGIF’s cell phone number and told him to send him a friend request on Facebook. When he added the racist Grindr user as a friend, Curtis saw that he was a Republican and a Trump supporter. The Blade confirmed that the pictures on the Facebook profile are of the same person as the Grindr profile.

Curtis sent what he found to Humphries, who posted it on Facebook.

“It seems as though the reason why he used these fake pictures, fake profile, totally different information [is] either he gets a kick out of it, he thinks it’s funny, or I don’t know what his motive is,” Humphries wrote.

He also pre-empted criticism about outing TGIF. “Keep in mind I never messaged him, he messaged me directly first.”

Another African American gay man wrote to Humphries to tell him that he, too, had received similar messages from TGIF.

When someone tagged TGIF on the post, he texted Curtis to get Humphries to take it down. “Look man, I truly apologize,” he wrote. “I truly apologize. I’m just now coming to terms with who I am.”

Curtis reached out to TGIF on a different app. “He immediately responded back, was like, ‘Who is this?’ ‘Tell him I’m sorry.’ ‘Tell him to take the post down.’ ‘I’m conservative.’ ‘I grew up in a conservative environment.’ ‘He shouldn’t be posting stuff like that.’”

“He kind of felt that Grindr was protecting him and he could act a certain way anonymously and not be held accountable… a total disregard for the other person’s feelings on the side of it. And all because of someone’s skin tone. To me, that is absolutely wrong and I feel like people shouldn’t be able to get away with that. It’s 2017.”

A Google search for TGIF’s civil name turned up an inactive LinkedIn profile that said that he was at one point an intern for Rep. Wilson. The Blade called Wilson’s office and confirmed that TGIF interned for his 2016 reelection campaign.

Besides shouting at the nation’s first African American president during his first State of the Union address, Wilson also has a solid anti-LGBTQ record, earning a consistent score of “0” on HRC’s congressional scorecard.

Humphries said that he wasn’t sure if it was right to post about this on a public forum like Facebook, but he eventually decided that he had to do something about the seemingly consequence-free environment that Grindr provided.

“You’re actively going around calling — not just me, but other black gay men — through social media and fake profiles a nigger. So I think the reason why I wanted to go through with this is based on there has to be some consequences for people’s actions regardless of what sphere it’s in.”

Fear of a gay planet: Were those lions really gay?