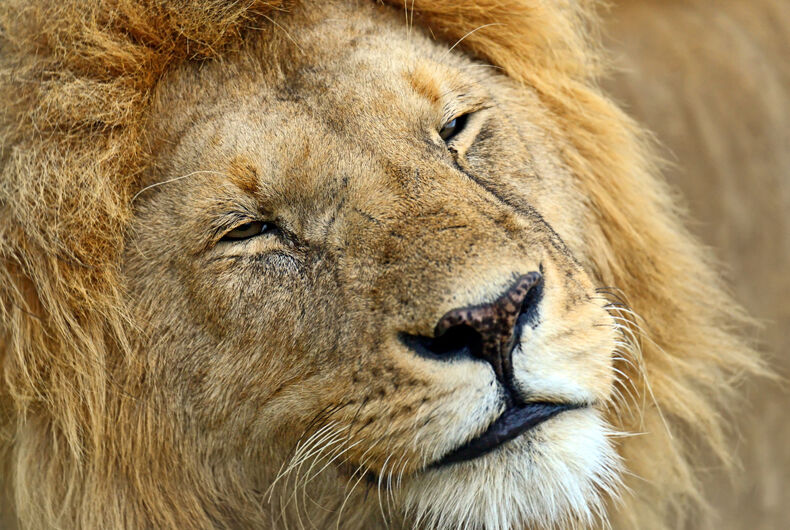 “Sometimes you just see something that takes your breath away,” he said. “I was guiding in the Masai Mara recently and we saw two impressive alpha males in perfect light. After a while they stood together, in perfect symmetry. What then happened was remarkable.”

The images went viral. Lots of people thought it was cool to see two lions engaged in some same-sex loving.

Live Science had to ruin all the fun and say that they aren’t really gay. They talked to Craig Packer, a lion researcher at the University of Minnesota, who said that the behavior is thought to be about reinforcing social bonds and it’s nothing like when a male is mating with a female.

Fair enough. I agree that we humans are often too quick to ascribe human motivations to animals’ behavior.

But… why is this only an issue when it comes to gay animal behavior? Humans are also really quick to assume that animals have heterosexual attractions, describing behavior that might happen for any number of reasons in very human and very straight terms.

Take, for example, the idea that some species of birds “mate for life.” We might be able to observe two birds sticking together for life, but is this because of heterosexual attraction? Or are they platonic best friends?

Recent studies using DNA evidence have found that lots of birds that supposedly mate for life are actually quite sexually promiscuous, finding that large percentages of chicks are not sired by their mother’s male “mate.”

Here is how ABC described the female birds’ motivation in their article on bird cheating: “That opens the way for a female that settled for an ordinary chap to enrich the gene pool by inviting a cool dude with obviously very good genes, as shown in his exceptional plumage and long tail, into the bushes with her.”

Um, do we know that the male bird she mated with was “cool”? Or that her “mate” – who is presumably fertilizing other females’ eggs too – is “ordinary”?

More to the point: do we know if the female chose to share a nest with her “mate” due to feelings that at all resemble human heterosexual impulses?

To which the answer might just be physical proximity.

Going back to the lions, the fact that the “mating” behavior observed by Goldstein is different from male-female behavior doesn’t necessarily mean that it’s the non-sexual one. Maybe the heterosexual sex is the loveless, unsatisfying kind that lions only engage in because they need to reproduce, while the male-male behavior is what really gets them going.

Not everything that instinct drives animals to do necessarily produces sexual pleasure.

“[Male-male mounting behavior] is a social interaction that has nothing to do with sexual pleasure,” lion expert Packer told Live Science.

This reminds me of a conversation I had with my conservative Christian college roommate way back in the day. He said something about homosexuality being unnatural which is why animals only mate with the opposite sex, and I replied that a lot of animals engage in same-sex lovin’.

To which he huffed, “Animals do a lot of weird things. There’s no point in trying to understand it.”

It’s possible that the sensations that drive different species to engage in male-female behavior are completely beyond our comprehension.

I’m not saying that we should or shouldn’t anthropomorphize animal behavior – it’s usually harmless and we humans find it so fun that half the internet is devoted to animal memes.

I am asking why it’s only a problem to do it when we’re talking about gay animals. And I think I already know the answer to that.

This trans woman said that she has been assaulted in a male prison. So she’s suing.