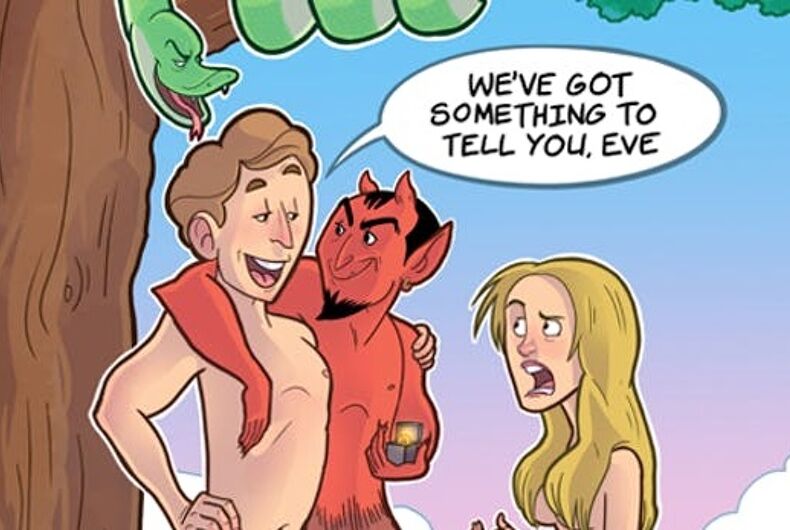 On Tuesday, Australia announced that over 60% of people voted in favor of lifting the ban on marriage between two people of the same sex.

Christian conservatives are not taking the news well.

The Spectator Australia, a conservative magazine not affiliated with the American Spectator, has released their first issue since the results were announced.

The cover art is not subtle.

But if you missed the point, an editorial explains:

The devil is in the detail. And the snakes are in the grass. This week’s cover by Sarah Dudley and Ben Davis accurately reflects the outcome of the same-sex marriage survey, highlighting the religious and cultural threats now unleashed.

Like… the threat that straight men will leave their wives to marry Satan?

The unsigned editorial goes on to say that the magazine actually supports marriage equality, it’s just that they worry – like any other rational person would – that schools will now enforce the “homosexual agenda,” which includes turning kids gay:

Which, in turn, means that should your school or a teacher decide to ‘educate’ your young child, or your teenager, about the joys and ways of homosexual couplings and ‘encourage’ them to ‘identify with’ such practices themselves, you as a parent or grand-parent will no longer have the legal right to object in any shape or form. Welcome to our brave new world.

In a separate piece, self-described “leader in the Mens Movement” Warwick Marsh sends a dispatch from an alternative universe in which it’s actually gay people who oppose marriage equality.

First, before you assume that Marsh is homophobic, he said that he called a “homosexual friend” who totally exists and who worked for the campaign against marriage equality. He was worried that his “homosexual friend” would be the victim of “violence” from those awful “cultural Marxist elites” who, between lattes and lectures about Jacques Derrida, go around in mobs and beat up anyone they find wearing a cross around their neck.

Fortunately, his “homosexual friend” was safe. Marsh is a stand-up guy.

Then he went on to relate what a “friend in the music industry,” who is also not a crank, told him: this friend has forty gay friends of his own, and all of them voted against marriage equality!

He told me that all forty of his gay friends in the music industry had voted ‘No’ and they had individually wondered out loud to him who the rainbow collective was? They had never met them nor did they know them. How dare these gay radicals speak so strongly on their behalf without their permission?

“It would appear the homosexual community was used unwillingly,” Marsh writes.

Used to what end, you are assuredly thinking? To “degenderize our children,” Marsh responds.

He goes on to describe at length the plot, which started at the 1917 Bolshevik revolution, to destroy Australian civilization through “Safe Schools ideology.”

I thought that with the consistently positive polling in Australia that the right would at least be ready to lose. But I guess they convinced themselves that people would believe their conspiracy theories.

Are mostly straight men their own sexual orientation?