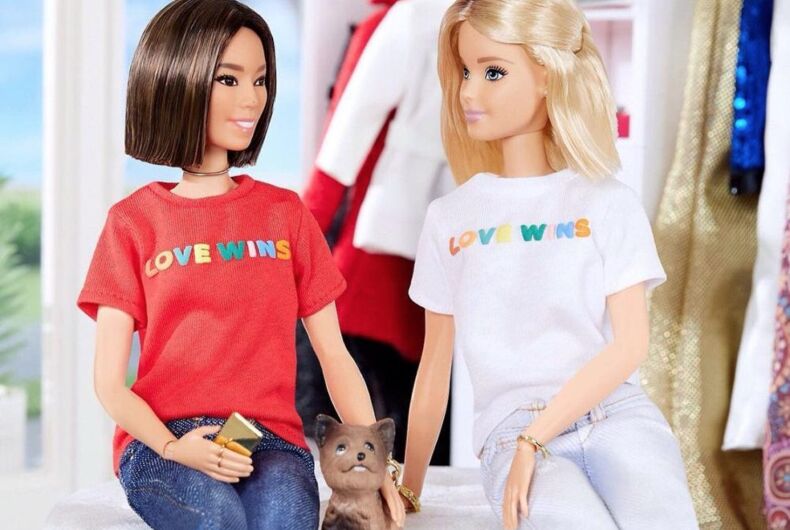 Barbie, the iconic doll with impossible proportions, is making a bold statement on Instagram. Not only is Barbie coming out as a marriage equality supporter, some people believe the toy just came out as bisexual.

In a post made in celebration of Australia’s postal survey vote to legalize same-sex marriage in the country, the company posted a photo of the Song and Barbie dolls wearing the popular “LOVE WINS” slogan that became popular after the results were announced.

Another post shows the two dolls having brunch in LA – complete with avocado toast.

Commenters, of course, quickly took to the posts to express their love of the photos and insisting it was Barbie’s big coming out as bisexual. Rainbow flag emojis reigned as users expressed their joy.

“YAAAS BARBIE YOU GO GIRL”, one user wrote. “These shirts weren’t the only thing to come out of Barbie’s closet,” another said.

But what about you? Was this Barbie’s big coming out or is she a straight ally showing support for marriage equality? Should we check with Ken?!?

Or maybe this Instagram commenter says it best. “The post doesn’t even confirm that Barbie herself is a lesbian, or even bi. So all the butthurt homophobes can calm down. (Not like little girls haven’t been making their dolls kiss for decades anyway ?)”

Proud to wear this “Love Wins” shirt with @songofstyle! Did you know that her exclusive t-shirts benefit different causes and non-profits? Such an inspiring initiative and fabulous few days I have spent with Aimee, she’s a doll! 💖 #barbie #barbiestyle

A lesbian couple was raped, beaten & held in a basement for 4 days