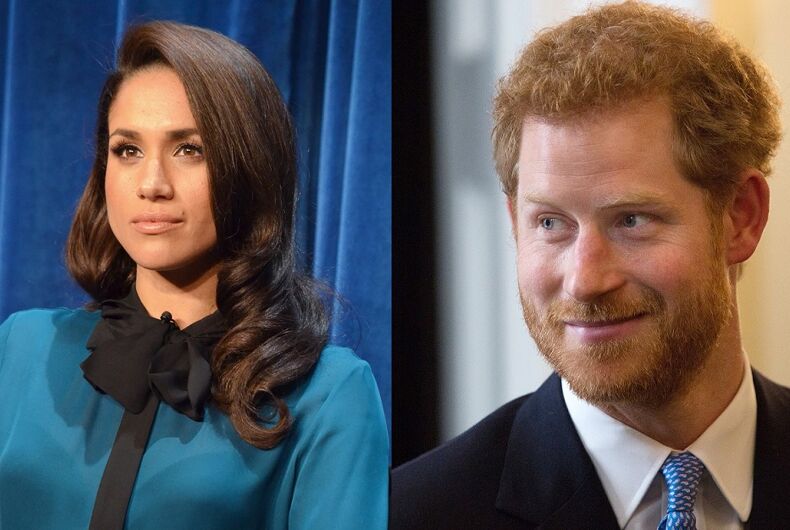 Prince Harry announced that he is engaged to American actress Meghan Markle.

Markle is best known for her role as Rachel Zane in the show Suits. She has also worked with the United Nations Entity for Gender Equality and the Empowerment of Women as an advocate.

Harry has been a long-time advocate of LGBT equality and HIV testing. Last year on World AIDS Day, he and pop star Rihanna got tested together. He has also visited HIV clinics, accepted an award on behalf of his mother Princess Diana from gay UK magazine Attitude, gotten tested on Facebook Live.

In the BBC documentary The Truth about HIV, he said that he wants to make people realize that HIV/AIDS is not just a gay issue. “The issue itself needs a straight guy, mid-30s, to come in and try and normalize it. Once again, I’m fortunate enough to be in this position in order to make a difference.”

Last month, in an event at Buckingham Palace, Harry said said that Mermaids – an organization that supports transgender youth in the UK – was “amazing.”

Harry and Markle have been dating for some time, but the first public acknowledgement of their relationship happened earlier this month when the royal family’s communications secretary released a statement denouncing the racist and sexist attacks on Markle, who is biracial, in the media.

“His girlfriend, Meghan Markle, has been subject to a wave of abuse and harassment,” the statement said. “Some of this has been very public – the smear on the front page of a national newspaper; the racial undertones of comment pieces; and the outright sexism and racism of social media trolls and web article comments.”

One story they were responding to was a Daily Mail piece entitled “Harry’s Girl is (Almost) Straight Outta Compton,” a reference to an album by the rap group N.W.A.

The article described Crenshaw, the Los Angeles neighborhood she grew up in, as the “gang-scarred home of her mother,” and listed crime statistics for the area, which it said was full of “tatty one-storey homes.” The paper cheekily asked if Harry, who is white, will be “dropping by for tea?”

The video being described is a scene from Suits where she takes off her T-shirt.

Markle’s mother is African American and her father is white. She wrote an essay last year for Elle UK about the racism she faced growing up in Los Angeles, like hearing her mother get called the n-word.

She also wrote about being “ethnically ambiguous” in a culture obsessed with assigning a stable racial designation to every person. When she was in 7th grade, she didn’t know what box to check for her race on a form.

The attitudes followed her to adulthood, when she had trouble getting roles because they were intended for actresses of a certain ethnicity. “There couldn’t possibly be a more label-driven industry than acting, seeing as every audition comes with a character breakdown: ‘Beautiful, sassy, Latina, 20s’; ‘African American, urban, pretty, early 30s’; ‘Caucasian, blonde, modern girl next door’. Every role has a label; every casting is for something specific.”

Markle has been a feminist since she was little. The BBC wrote in a profile about her, “Aged 11, she forced a soap manufacturer to alter an advert after she wrote a letter to then First Lady Hillary Clinton and other high-profile figures complaining that it implied women belonged in the kitchen.”

According to The Guardian, Markle will likely become a duchess when she marries Harry.

Did Barbie just come out as bi on Instagram?