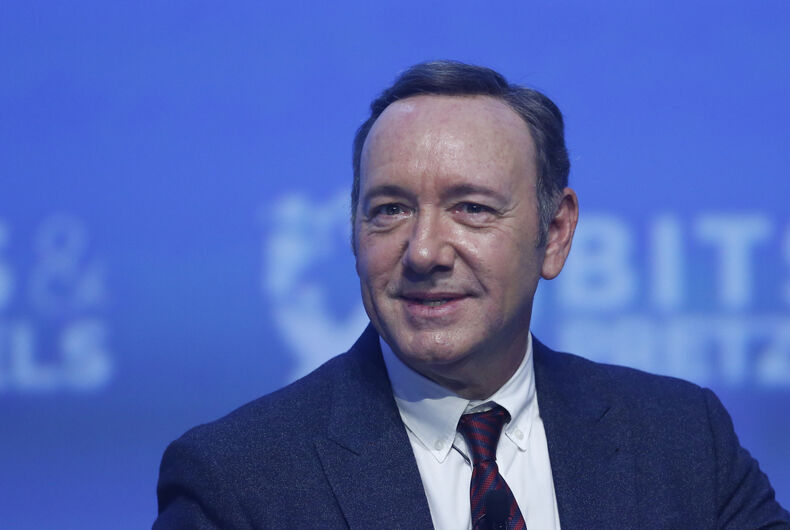 A 48-year-old gay man said that he was in a sexual relationship with Kevin Spacey as a teenager and that Spacey tried to rape him.

The man spoke with Vulture and asked to remain anonymous.

He said that he met Spacey when he was 12 and Spacey was 22 at theater classes at a local church in New York. Nothing happened between them then, and they ran into each other two years later in Manhattan in 1983.

They went for a short walk with Spacey’s dog, and Spacey gave him his number. The boy when to his apartment and they had sex.

They had sex several times over the next few months while he was 14, and the alleged victim said that he thought he was in love. Spacey promised to get him auditions in plays, but nothing ever came of it.

At some point, when the victim was 15, he called Spacey and they only had a few minutes to meet before he had to meet up with his parents. “And I thought we were going to kiss and tell each other we loved each other and I was going to go. But he wanted to have sex, and this time he wanted to fuck me, which had never happened to me before,” he said.

He said Spacey didn’t ask him to have sex, he just tried to start doing it. “I guess he must have come up behind me and yanked down my baggy jeans, and he goes to fuck me and I’m like, ‘No, I don’t want to.'”

The teenager pushed him off and ran away crying. He then met up with his parents. He called Spacey a few times over the next year, but they never saw each other again.

The victim said that he has been blaming himself for what happened because, when he was 14, he thought he was very mature. “Every time I’ve ever told the story, I am compelled to tell people how seductive I was towards these men [Spacey and the victim’s cousin]. I’m compelled to tell people how much I wanted these things because some very deep part of me feels like it’s lying if I don’t say that.”

He didn’t tell his parents but he told a few of his friends over the years, and Vulture confirmed that he had told them his story. Vulture also confirmed a few of the details of the story. Spacey’s lawyer said he denies the allegations.

The victim said that he is telling his story now because Anthony Rapp “opened the door for me” by talking about how Spacey sexually assaulted him when he was 14.

Several other alleged victims of Spacey came forward this week, including several crew members of House of Cards who said that Spacey made the work environment “toxic” for young men, actor Tony Montana, and a former bartender at a theater where Spacey was the artistic director.