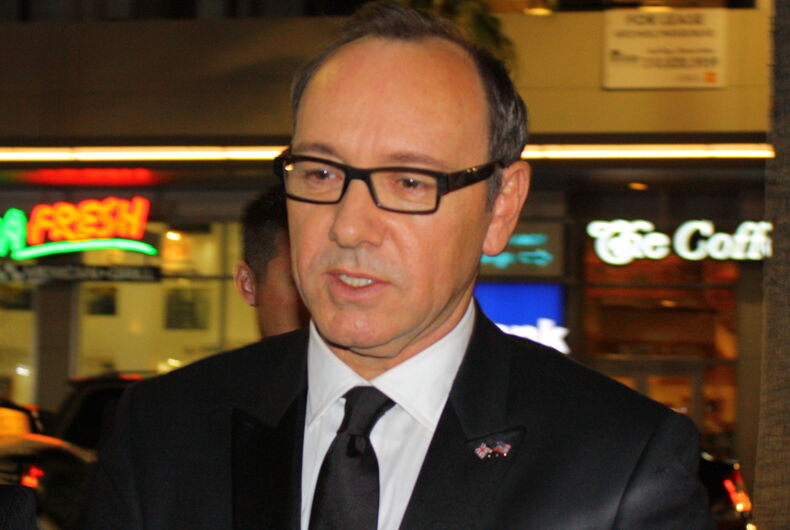 Netflix has announced that is indefinitely suspending production on its hit show “House of Cards” as more allegations of sexual harassment and assault are leveled against star Kevin Spacey. The company had previously confirmed that it was ending those after the current season when Spacey was first accused, but as more men have stepped forward with their own stories, Netflix is likely pulling the plug on the show.

Out actor Anthony Rapp first accused Spacey of sexually assaulting him when Rapp was 14 and Spacey was 26. Other allegations quickly surfaced by two women who claimed the star had assaulted their friends.

“MRC and Netflix have decided to suspend production on “House of Cards” season six, until further notice, to give us time to review the current situation and to address any concerns of our cast and crew,” the two companies said in a joint statement to Deadline.

“I went up to order a drink and Kevin came up to me and put his arm around me,” Montana told Radar. “He was telling me to come with him, to leave the bar. He put his hand on my crotch forcefully and grabbed my whole package.”

“I put my hand down and turned his thumb back to get his hand off it,” Montana said. “I paid for my drink and got away from him.”

Montana says Spacey followed him to the bathroom to continue the harassment until Montana forcefully pushed him away and told Spacey’s friends to take him home. As in Rapp’s accusation, Montana said that Spacey was drunk at the time.

Beal’s claim centers around his former job as a hotel bartender when he was 19. He says Spacey would regularly touch his hand while being served and followed him outside one night when Beal took a smoke break.

Spacey sat down next to him on a bench and exposed himself, Beal says, asking “It’s big, isn’t it?”

Beal also says that when rebuffed, Spacey insisting on exchanging his expensive IWC Portofino watch for Beal’s cheap Casio timepiece. “Looking back he was trying to manipulate me as soon as he walked into that bar,” Beal told the Sun.

He says one of Spacey’s aides contacted him later to try to retrieve the watch, but that he had already sold it for thousands of pounds. When Spacey discovered the watch was gone, his management team complained to the teenager’s employer.

According to the Evening Standard, Spacey has also been accused by an unnamed British journalist who claims Spacey propositioned him in a toilet in Edinburgh during a festival.

Spacey was working at the Old Vic theater in London as an artistic director at the time of the recent allegations from across the pond.

“The Old Vic would like to respond to recent media reports by making it clear that we are deeply dismayed to hear the allegations levied against former artistic director Kevin Spacey, who was artistic director from 2004-2015,” the theater said in a statement. “Inappropriate behaviour by anyone working at the Old Vic is completely unacceptable.

“We want our employees to feel confident, valued and proud to be part of the Old Vic family. Any behaviour we become aware of which contravenes these goals will not be tolerated.

“If you have been connected with the Old Vic or in our employment and feel you have a complaint that you were unable to raise, please contact us on [email protected] Any experience shared will be treated in the utmost confidence and with sensitivity. We have appointed external advisers to help us deal with any information received.”

Trump supporters are about to freak out because of nothing