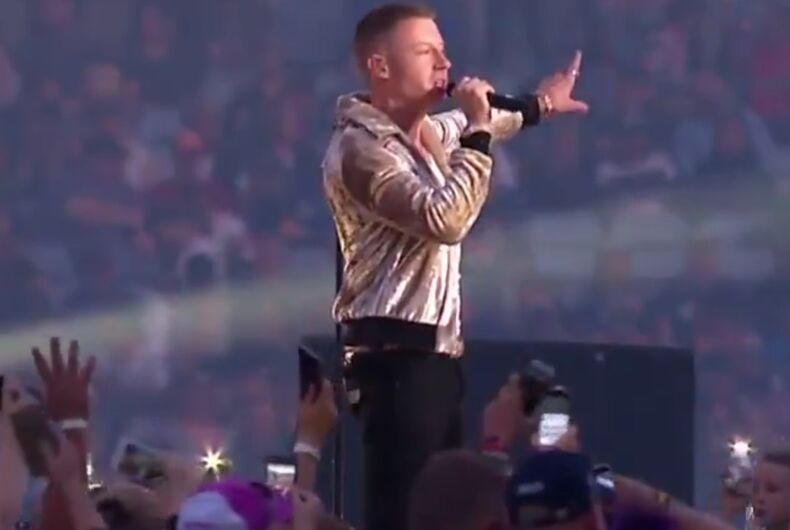 Conservatives in Australia were outraged at the National Rugby League (NRL) last week because rapper Macklemore was set to perform at the Grand Final match last night.

The No campaign’s insecurity probably explains why conservative politicians are lashing out at Macklemore, who performed one of his biggest hits, “Same Love,” at the Grand Final match last night.

The song has a definite pro-LGBTQ message, including a few lines about marriage equality.

One former pro rugby player started a petition, asking the NRL to “reconsider its political position and remove LGBTIQ politics out of the awesome sport of Rugby League.”

Others have spoken out, calling the performance “political,” including conservative Prime Minister Tony Abbott.

Macklemore probably knew about the controversy, which might be why his performance of “Same Love” was so good.

Onstage with Macklemore was Mary Lambert, who told the Advocate that the song is about love, not politics.

“As a lesbian in Western Massachusetts, it’s easy to forget that gay marriage is illegal in the majority of the world and that gay relationships are illegal and punishable in 76 countries,” she said. “Performing ‘Same Love’ in Australia is not about being political, it’s about being human.”

During the same rugby match, the No campaign aired a previously banned ad.

The ad, which shows negative online comments that they have received, was not permitted to be aired during an earlier Australian Football League match due to the “mature” language. But the ad was permitted during the NRL Grand Final match.

The ad just shows some mean internet comments the No campaign has received, and they aren’t particularly mean. For example, one featured comment calls them “sad.”

The No campaign has been pretty whiny, and this ad speaks to the bubble of self-pity the campaigners are working in. Most people don’t care if someone they never met is getting called a “homophobe” online. If anything, they don’t want to be associated with a stance that they see as unjust.

The No campaign is outspending the Yes campaign by 5 to 1, but if this is what they’re spending their money on, then there’s little reason to worry.

LGBTQ history can be found in everyone’s past