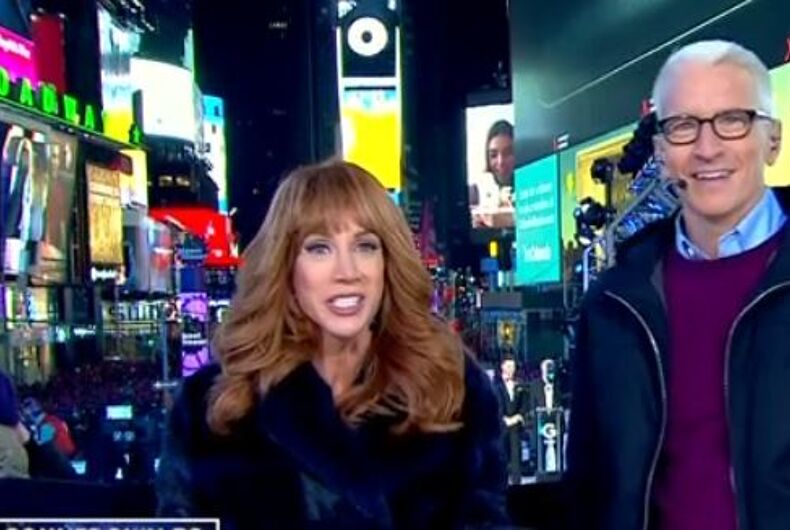 She took a knee and raised a fist, a nod to the NFL protests that Trump and Pence have both denounced, and then spiked the mask, to uproarious applause.

Griffin took immense heat, including an investigation by the Secret Service, for her stunt with photographer Tyler Shields, where she was shot holding what looked like the president’s severed, bloody head.

“Hello, gays!” Griffin yelled over the cheers. “It’s me, Kathy Griffin, a genuine comedy fugitive. Can you handle it?”

After running down everything that has happened to her recently, including her sister and her dog dying, her own mother taking Fox News’ side, and calling Harvey Weinstein a rapist, she went after ex-friend Anderson Cooper.

Griffin has said that she cut ties with the CNN anchor after he publicly criticized her for the Trump decapitation photo.

She concluded her appearance by reading a letter she received from a gay man critical of Cooper.

“I’m going to leave you with a cup of tea, honey. This is a cup of gay tea that is fucking scandalous and it involves Anderson Cooper,” she said.

She told the audience that the man told her he also sent the letter to Cooper, to whom it is addressed.

“It’s so heinous and so over-the-top horrible that I admit it made me laugh out loud,” Griffin said of the letter, before reading it aloud.

“Dear Anderson, from one homo to another, you’re a fickle faggot,” she read. “Really? Not supporting and backing Kathy Griffin after she had your back for years. Even to talk about your cock-sucking in her comedy back when you were still a closeted queen. And another thing, Anderson: Homo rule 101, you always back your fag hag.”

“I’m going to leave you with a cup of gay tea…and it involves @andersoncooper.” @kathygriffin reads letter they both received. ☕️ pic.twitter.com/VxqETeiKXO