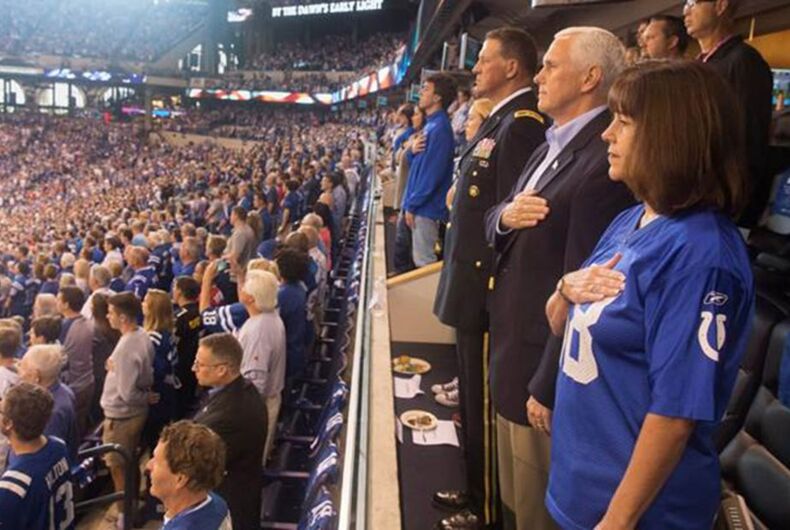 Vice President Mike Pence took in a football game in Indianapolis yesterday, except he didn’t, and he never planned to in the first place.

Instead, he took in the paid advertisement for America that plays at the start of every game, a relatively new tradition by the way, standing with wife Karen, hand over sanctimonious little heart, basking in the photo op.

Then, when some of the players on the visiting San Francisco 49ers took a knee, as everyone knew they would, he ceremoniously stormed out. And, like the drama queen he is, he shared the whole theatrical adventure on Twitter.

The entire stunt, which came at a price tag of around a quarter of a million dollars, was “long planned,” as Trump himself admitted.

The trip by @VP Pence was long planned. He is receiving great praise for leaving game after the players showed such disrespect for country!

Trump, the pretend populist, felt the best use of taxpayer money was a red, white, and blue temper tantrum from the man who is next in line for the presidency. This is not surprising.

It is not surprising considering how much money Trump leeches off the public for his many golf outings, hypocritically one might add, in light of his criticism of Obama for his, far more infrequent, golf trips.

It is also not surprising because Mike Pence is the concerned Ken Doll in the deplorable toy basket of the Trump administration.

This is not his first outing as political prop, used to please the tiny handed puppet master pulling his strings.

Remember when he mean mugged for the whole of North Korea, standing at the Demilitarized Zone with his chest puffed out, Christian haircut painted on, looking to intimidate a madman and his nation of forced sycophants?

Because when you have no real policy wins and are under investigation for colluding with a foreign government to win an election so crooked it’s a wonder we still have the gall to call ourselves a democracy, you have to play pretend.

But will it work?

Is getting a guy so milquetoast he makes actual milk toast look threatening to play pretend enforcer a winning strategy?

Is trying to own a protest that never had anything to do with the Trump administration, or the National Anthem, the flag, or the military?

It, like so much else, appears to be doing more harm than good overall, as Trump’s approval rating continues to plummet.

Not that it necessarily matter, mind you.

As we learned in 2016, Trump doesn’t have to win over the majority of the country to win the presidency. He just has to win in the battleground states. He just needs to keep strong ties with his base.

As The Washington Post reports, he is on track to win reelection, provided he isn’t removed from office before then, leaving us with a President Pence in his place.

And he knows it.

So why would the Trump administration think it a good idea to sink resources and energy into stunts nearly everyone can see through? Because it is.

When you say Trump is not your president, he agrees.

He never intended to be your president. You either like him or you get lost. He’s not trying to impress you, he’s trying to impress simpletons, who get misty eyed at high priced patriotic displays, and who think beating your chest like an ape is an effective foreign policy directive.

This theater is not for you. They’re playing to the drink-tossing groundlings, and they’re applauding bigly. Just check Twitter.

Stand and honor Her, for She is magnificent in her absurdity.