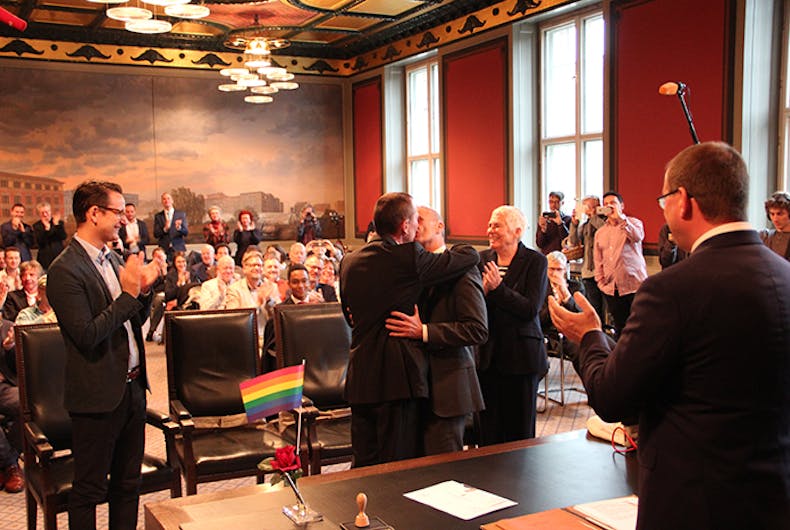 German’s gay couples are finally allowed to wed, with the country’s marriage equality law coming into effect on Sunday, and Bodo Mende, 60, and Karl Kreile, 59, were honored to go first.

The couple of nearly 40 years, who have fought for gay rights for decades, tied the knot in Berlin’s Schoeneberg district, an area known for its LGBTQ population.

Same-sex couples have been limited to registered partnerships up until now, which itself was only granted in 2001, and does not offer the same wealth of legal rights as marriage. German parliament voted in June to legalize marriage equality, after Chancellor Angela Merkel at long last allowed a vote to take place.

About 60 guests and as many journalists were present for the historic moment, ABC reports.

Some 25 years ago, Mende and Kreile went into a registry office and asked to be married, and were politely turned away. It is a moment Kreile recalls filled him with shame.

“This is an emotional moment with great symbolism,” Kreile told the Associated Press as the wedding day approached. “The transition to the term ‘marriage’ shows that the German state recognizes us as real equals.”

After exchanging vows, the couple cut into a cake, featuring a rainbow flag and the words “marriage for all.” The couple plans to hold a small reception and fly to Vienna later in the week for a five-day honeymoon.

Watch history being made in the video below, as Mende and Kreile become the first same-sex couple to wed in Germany.

Congratulations to them, and to all the other German couples who have at last been granted the right to marry.