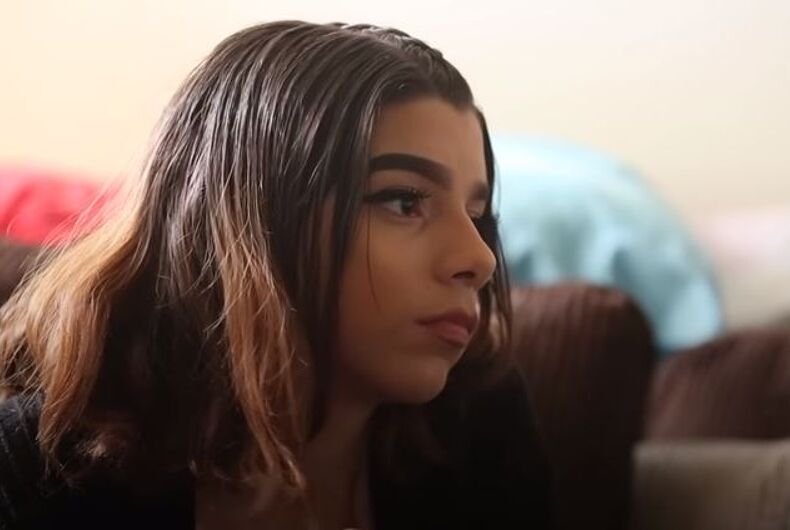 Kyle Perez talks about the harassment she has suffered as an out trans teen.Photo: YouTube/NJ.com

Kylie Perez, a 14 year-old in Newark, New Jersey who was beaten by at least four fellow students at her high school late last week, is not going to let the incident be forgotten. Instead, she will speak out in a series of anti-bullying assemblies to be held at the school.

Perez told PIX11 she heard a girl say, “Oh, there’s the tranny,” before getting punched and falling to the ground, where the assault continued. It was captured on East Side High School’s security cameras.

Perez, who transitioned in the 6th grade, reports having suffered anti-LGBTQ harassment for years. She and her mother, Lillian Richards, reported the incident to the school, as well as the Newark Police Department, who in turn notified the Essex County Prosecutor’s office. It is being investigated as a hate crime.

The prosecutor’s office said on Monday that there has so far been no decision on whether anyone would be charged.

Meanwhile, seven students have been suspended for filming the incident instead of trying to stop it.

“I’m not going let it fade away,” Perez said on Monday. “I’m going to make sure that people know that trans lives, every life, matters.”

The school will also partner with GLSEN to provide additional anti-bullying resources to staff and students.

“I join the LGBTQI community as well as the parents, students, and citizens of Newark who are appalled by the recent bullying and vicious attack on fourteen-year-old Kylie Perez, a transgender student, at East Side High School,” he said.

“We must remain vigilant as a community and continue to denounce and to prosecute the hate crimes that are perpetrated upon members of the LGBTQI community,” Baraka added. “This act was particularly egregious because the victim is a young teen whose attackers assailed her without warning.

“We want Kylie to know she is safe at East Side High School,” Newark Public Schools Deputy Superintendent Robert Gregory said. “We want her to focus on her education and we really are ready to do anything and everything to make it comfortable for her.”

Violence against the transgender community is sadly not uncommon. This year in the United States alone, at least 21 transgender people have been murdered. Most of those victims, as in previous years, have been trans women of color.