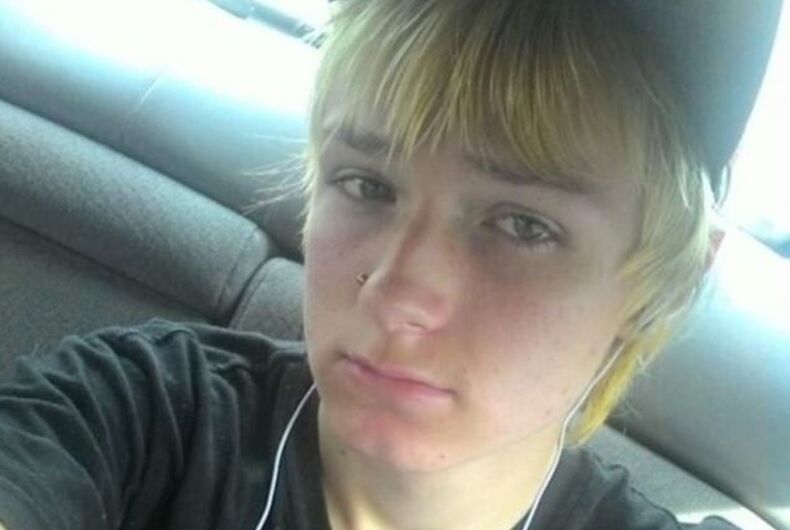 Ally Steinfeld is believed to be at least the 21st transgender person murdered this year in the United States.Photo: Facebook

A transgender teenager was murdered in Texas County, Missouri, in a horrifying case in which four have been arrested and charged. This is believed to be at least the 21st murder of a transgender person this year in the United States alone.

The body of 17 year-old Ally Steinfeld was found over the weekend, after a frantic search by her family that began earlier this month when she went missing. Her remains were discovered near a mobile home 24 year-old Briana Calderas.

Steinfeld was last seen with Calderas, Schauer, and Vrba, and the family felt they were lying when they claimed not to know anything concerning her whereabouts. Police obtained a search warrant to look through Schauer’s phone, finding Facebook messages from Vrba telling her to “stick to the story” and “quit talking.”

Vrba admitted to police that he stabbed Steinfeld repeatedly, after first attempting to poison her, but offered no motive. He said he, Schauer, and Calderas then burned her body, and placed some of the bones into a garbage bag, placing it in a chicken coop near the residence.

Schauer and Calderas said Vrba told them he also gouged out her eyes and stabbed her genitals repeatedly.

Calderas admitted Steinfeld was killed at her home and that she helped burn her body. She led police to the knife used in the murder, as well as to Steinfeld’s phone.

Local authorities have so far refused to label the killing a hate crime, saying the motivation wasn’t Steinfeld’s gender identity. They refused to release a motive that could support such an rage-filled and vicious attack that wasn’t motivated by emotion.

“I would say murder in the first-degree is all that matters,” Sheriff James Sigman told the New York Post. “That is a hate crime in itself.”

Transgender woman Derricka Brown was murdered earlier this month in Charlotte by a man she met up with for a sexual encounter.

More recently, non-binary student Scout Schultz was shot and killed by police at Georgia Tech while holding a closed pocketknife and telling them to shoot. It has since been discovered that the officer who shot and killed Schultz had not received crisis intervention training.