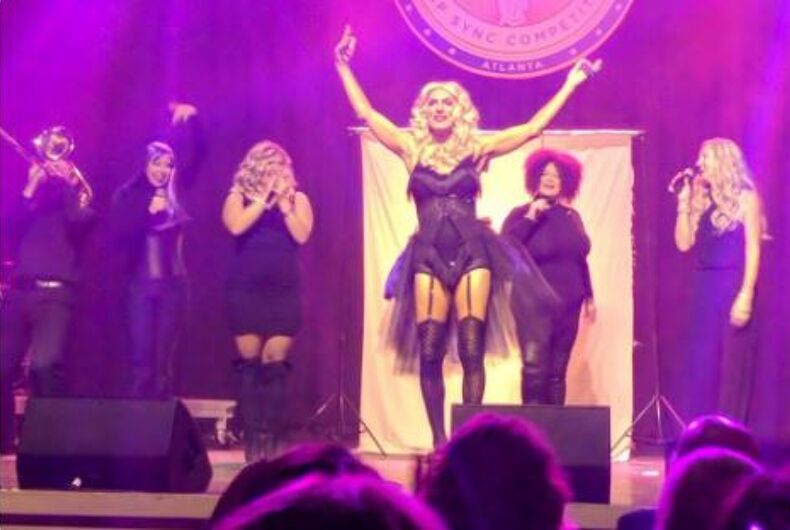 A Republican mayor in Georgia who helped raised a quarter of a million dollars to help Alzheimer’s patients with a drag performance has responded to his criticswho thought dressing in drag was beneath his office.

Kennesaw Mayor Derek Easterling hit the stage at Buckhead Theatre in Atlanta last week, impersonating Christina Aguilera for the charity event Battle of the Brain, hosted by Daughters Against Alzheimer’s Association. It has brought about a mixed reaction on social media, but Easterling isn’t sweating it.

He is so not sorry that he and nine other competitors helped bring in $250,000 to make life better for those suffering with a serious illness.

People are questioning this Mayor after he dressed in drag. He says it was for a good cause. The story at 11 @wsbtv pic.twitter.com/zB79aKJE9g

Debra Williams, a vice chair of the Cobb Republican Party who ran against Easterling and lost, and totally doesn’t sound like she’s a Bitter Betty over it, questioned her former opponent’s judgment.

“You know, I’ve got a good sense of humor and was hoping people would find entertainment value in it,” Easterling, who is also a middle school teacher, told the Marietta Daily Journal. “I didn’t want to do what everybody was expecting: Some stiff up there mouthing a song. I took it to the next level to raise awareness for the 5 million people that suffer from Alzheimer’s disease.”

The mayor also shared that he has a personal connection the issue, as his grandmother suffered from the disease.

And, as they say, you play to the room, and as he recalls it, they were loving it.

“They were cheering, everyone was standing on their feet, pumping their fists, and they continued to cheer,” he said. “So I think it’s safe to say they had a good time and they enjoyed it.”