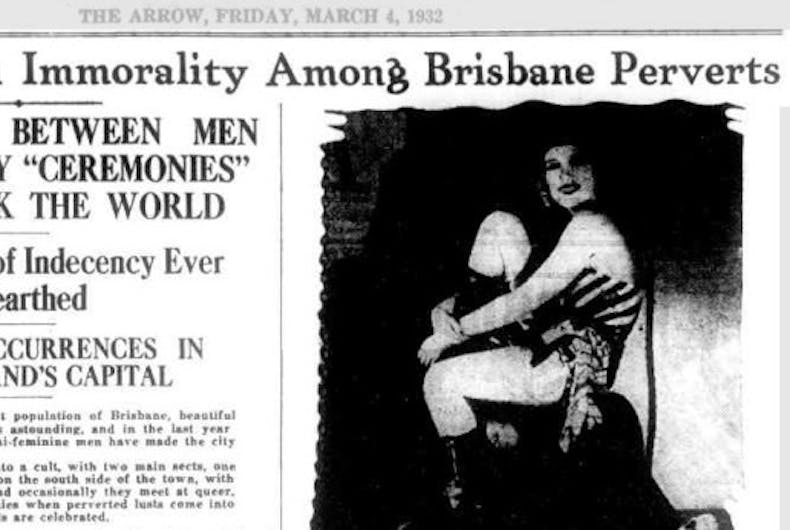 A history student in Brisbane has uncovered a 1932 newspaper article about same-sex couples getting married, and the reporter’s outrage is almost indistinguishable from the moral panic of today.

“Wide Open Immorality Among Brisbane Perverts,” shouts the 85-year-old headline, which frankly sounds like those old Australian queers just really knew how to have a good time. It goes on, in that fashion of writing five or six headlines for every story, “Worst Cases of Indecency Ever Unearthed,” and “‘Weddings’ Between Men Followed by ‘Ceremonies’ that Shock the World.”

The article describes two weddings as “ghastly, horrifying spectacles of painted men and primping lads united in a sacrilegious blasphemy.”

“The ceremonies are weird,” the article continues, and with every word we wish more and more that we could have been present to see it. “There is no concealment of the most degraded elements of their perverted natures.”

There is so much to love about the description of the events: “Even the ‘honeymoon’ is celebrated in public amid the plaudits of the rest of the painted men-dolls, dancing round in a hideous circle — the whole scene resembling a nightmare of evil.” Oh honey, if you think that’s bad, wait til you see Dolores Park on a Sunday.

As hysterical as the article is, it’s a nice little reminder that gay people have been around forever, and for as long as straights have been getting married, same-sex couples have as well. It might seem like gay marriage is a new invention, but the truth is it’s been around for longer than we’ve been alive.

The first marriage license knowingly issued by a government official to a same-sex couples might’ve been in the 1970s, but long before that, we were falling in love, pledging ourselves to each other, and meeting a queer, indecent, degrading ceremonies full of perverted lusts.