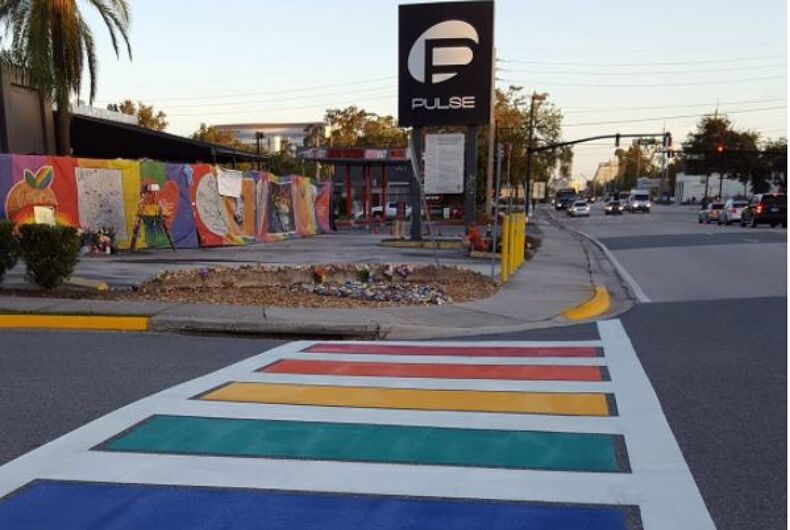 A rainbow crosswalk has been painted near the Pulse Nightclub in memory of the 49 people killed in the mass shooting at the site last year.

Orlando Mayor Buddy Dyer confirmed the plan for the crosswalk on Esther Street on Monday, at a city council meeting. At that same meeting, the onePULSE Foundation‘s plans for an “interim” memorial to make the area more visitor friendly were also approved, the Orlando Sentinel reports.

Orlando is installing a rainbow-colored crosswalk this week across Esther Street near Pulse nightclub, in memory of the 49 people killed in the mass shooting there last year. Photo by Todd Stewart, #OrlandoSentinel #orlandostrong

In addition to the pride crosswalk, the site will soon feature lighted benches, a new fence with murals, better landscaping, and an expanded walkway around the former club.

The onePulse Foundation, a 501(c)(3) incorporated by the owners of Pulse, is also gathering ideas for a permanent memorial at the site.

“You guys have done a fantastic job on the temporary memorial site, making it much more accessible and using the space on the site that currently is not available for use,” Dyer told onePULSE Foundation representatives. “It’s going to be much more friendly, I think, to the public that are coming there.”

Shortly before Trump addressed hate group, the leader claimed criticism of him was ‘demonic’

Why is LGBTQ History Month important to you?