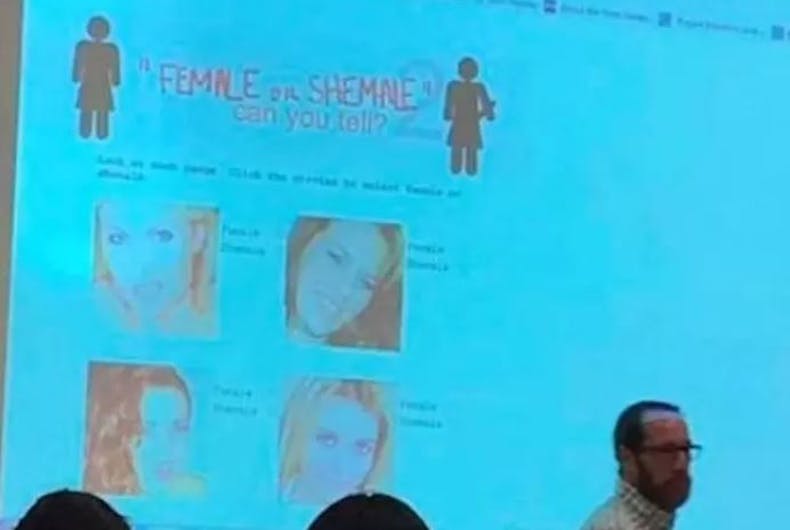 Officials at the State University of New York at Geneseo are investigating after a professor allegedly had students take a quiz based on transphobic slides he claimed were teaching aides.

Professor David Sorbello is said to have showed students the images during an introductory sociology class, telling them to try to identify the trans women in a “game” called “Female or Shemale: Can You Tell?”

RT if you think the sociology department @SUNYGeneseo needs to rethink its approach to teaching about trans issues pic.twitter.com/FwX0emHop0

“We are taking the matter very seriously and are gathering the facts to determine if and what action is warranted,” Battles said. “The classroom is an environment in which students and faculty can and should discuss challenging topics and ideas, which makes it all the more important that we gather and fully review the facts in the case.”

“As we review this situation, let me say unequivocally that SUNY Geneseo has a steadfast and uncompromising commitment to diversity and inclusivity. We work diligently to sustain an inviting and supportive environment for people of all gender identities, gender expressions, sexual orientations, races, religions and other identities,” she continued.

Sternberg told BuzzFeed News that Sorbello noticed how uncomfortable many of the students were by his “quiz.”

“Well doesn’t that mean that you’re doing something wrong?” she said in an interview with the local ABC News affiliate, suggesting the professor could have realized the error of his ways then and there.

When she confronted him after class, she reports he said it was “partly for humor and partly to discuss sexual dimorphism.”

They got the results back two days later, but there was never any discussion on how it related to the coursework in a constructive way.

She also told BuzzFeed that he also made derogatory comments while showing the slides.

“He said something along the lines of, ‘Be careful not to get too drunk or you’ll take the wrong one home,'” she remembered. “He would comment on some of the pictures like, ‘I’m definitely not going to the bar with you.'”

Sorbello’s only reaction so far has been to ban the use of electronic devices in his classes.

update: after students confronted Sorbello, he sent out an email banning the use of electronics in class. HE KNOWS HE'S IN THE WRONG. (3) pic.twitter.com/61FWJxUErr