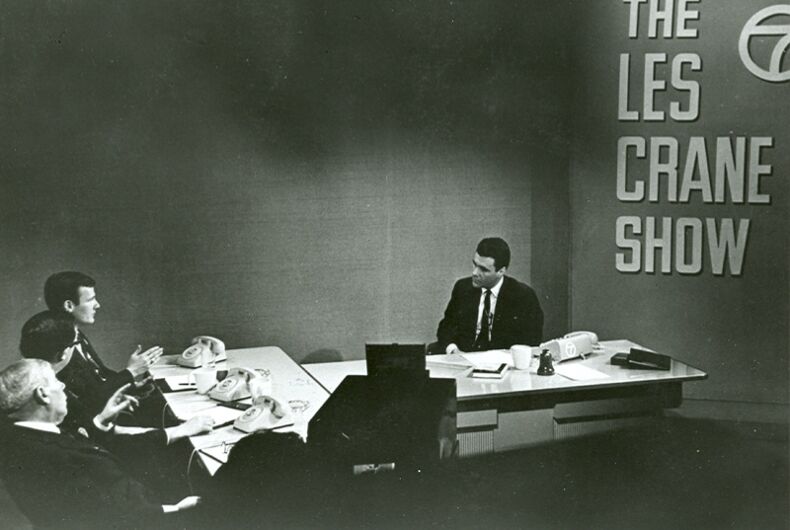 Randy Wicker may not be a familiar name to those familiar with LGBT history — but the 79-year-old made his mark in the movement, beginning in the 1960s.

Many assume the first organized protest for gay rights occurred on April 17, 1965, in front of the White House, where demonstrators, including Frank Kameny, protested the firing of gay and lesbian civil servants.

However, seven months earlier, Wicker organized his own gay-rights demonstration. On Sept. 19, 1964, Wicker and nine other members of the Sexual Freedom League picketed in front of the U.S. Army Induction Center to protest the confidentiality violation of gay men’s draft records. Wicker is also believed to have been the first openly gay person to appear on East Coast television without a fake name or disguise earlier that same year.

LGBTQ Nation sat down with Wicker to discuss these historic firsts, his time as the roommate of trans activist Marsha P. Johnson, his thoughts on President Donald Trump and his advice on how the community can move forward.

QN: Your family asked you to change your name from Charles Gervin Hayden, Jr. after you told them about your involvement in the 1960s gay-rights movement. How did you feel when they requested that of you?

RW: My father was very supportive. When he found out I was gay, he wanted me to be the best-adjusted gay person I could be because he wouldn’t always be there to support me. His name was “Senior” and in those days, he worked for the same corporation for about 27 years. So he just said to me, “I don’t think you’ll get far with this. Just do me one favor, will you?”

I said, “What’s that?” And he said, “Don’t involve my good name.” So I assumed the name Randolfe Wicker as a pseudonym very early in the movement because I had to respect my father’s wishes. I didn’t want to cause him any problems.

QN: How did you choose your new name?

RW: I saw a movie with Randolph Scott and I thought it was very elegant. He got off a yacht and stood on a pier. I remember Donald Webster Cory, who had published The Homosexual in America, had to choose a middle name because they were afraid there would be a Donald Cory somewhere that would sue so I thought I’d spell “Randolph” a different way. It seemed to me that it could easily be spelled “R-a-n-d-o-l-f-e.” So I chose the unique spelling of the name.

QN: In 1962, New York’s WBAI Radio broadcast a radio program called “The Homosexual In America,” on which psychiatrists talked about homosexuality as a disease. You marched in and confronted the station’s public affairs director. What led you to doing that, and what transpired from that encounter?

RW: They [previously aired] these panels where psychiatrists were talking about homosexuality as a disease and how they treated it. I went up and told them this problem is illegitimate because homosexuals were the real authority on homosexuality. So the gentleman told me, “Get together a panel and I’ll come and interview them.”

So I got together a panel and he did the interview and a week before it was broadcast, Jack O’Brien, who was a right-wing columnist for the [New York] Journal American, said that WBAI had announced this program because they thought homosexuals had a right to be heard and the six-man panel would discuss “the ease of living the gay life.” So I took this little attack in the Journal American a week before the broadcast and made the rounds to Newsweek, Variety, the New York Times and told them about this show.

When the program was finally broadcast, it was written up by the New York Times. It was a news story. It was reviewed by Jack Gould from the Times. It got a full-page in Newsweek. It made Variety. It was the most-publicized broadcast that the network ever did.

QN: You appeared on “The Les Crane Show” and answered questions about homosexuality, where you were believed to be the first gay person to appear openly on East Coast TV without a disguise or a fake name.

RW: They contacted me and Les Crane was the cutting edge new show and homosexuality was one of the taboo topics. I had to answer call-in questions and some of them were pretty direct. I had one woman call in and say she had a cousin or an uncle who she knew was gay. She worried about him being in contact with her children. I told her I thought the chances of any problems like that would be very minor, especially if she let him know that she knew he was gay, knew that he would not do anything nefarious.

QN: What kind of reactions did you receive after that TV appearance?

RW: Generally very good. When I opened my [art deco] store in 1974, I’d say for a period of maybe 10 years, there would be several people who would come through that door every week and they always said the same thing. They said, “You changed my life.”

People don’t realize that, in those days, you thought you were the only one. Then, they saw me on “The Les Crane Show” and it made them realize there were others like themselves.

QN: Later that year, you also organized a protest at the New York City U.S. Army Induction Center. What led you to doing that?

RW: There were two things. First, if you were in the Army and they found out, you would get a dishonorable discharge and that’s something that would follow you all your life. I actually found out that being 4F was a problem because you have to have a problem while you’re a 4F so I came up with the idea that I had a childhood history of epilepsy.

Then when I decided to become a substitute teacher in New York City, [I learned] that to become a teacher, you had to sign a release — supposedly, your draft records are private — but to get a teaching license, you would have to sign a release to enable them to look into your records and see why you’re 4F. This was the ’60s and that eliminated my chance to use my degree effectively.

Sometimes, they’ll tell you that whatever you say is confidential. It’s not necessarily so.

QN: You were once roommates with Marsha P. Johnson. What are some memories you look back on with her?

RW: She was the greatest thing that happened to me in my life. She always made us laugh. Whenever I would invite anyone to my house, they would fall in love with Marsha. I think it’s just amazing that people fall in love with her through [the documentary I helped finance], “Pay It No Mind — The Life and Times of Marsha P. Johnson.” We have a Marsha P. Johnson fan page on Facebook and that page has its own life. The more people hear about Marsha, the more people look [up to her].

QN: What are your thoughts on the current political climate?

RW: Donald Trump scares me to death but I think what he has really done is he’s caused the younger generation to become interested in civics and politics. With his really hateful policies, he has made young people that never vote realize how the government works. I think we have a great civics lesson with Donald Trump. Hopefully, it will reinvigorate our society and get young people involved.

This reminds me of the Vietnam War. People were being involuntarily drafted in the Army and, all of a sudden, people were really concerned about what’s happening overseas. Today we have problems with immigration — all the Dreamers and all of these people that really are Americans but aren’t recognized as such.

QN: What do you think the LGBT community can learn from your activism?

RW: I really do feel [the professional activists in Washington] are mainly a bunch of overpaid, mealy-mouthed bureaucrat lobbyists but I stand in awe of what these mealy-mouthed bureaucrat lobbyists have accomplished. I never dreamed I would ever live to see gay marriage. That was so far off our radar. I never thought I would live to see the things we’re seeing now but, then again, I’m also scared because it seems to me we have two worlds, and one world is going backwards.

That’s the world of the Middle East where they are hanging gay people or cutting off their heads, or throwing them off buildings in places like India or even Egypt where they just arrested people for waving a gay flag at a concert. It seems like the fight is not over. We’re never going to be safe as a people until we’re safe everywhere.

QN: What do you think is the best way for the LGBT community to move forward?

RW: Focus on liberating women and saving our brothers and sisters overseas. We have to eliminate ignorance through education. These things are like diseases. We need to eliminate homophobia the way they try to eliminate polio. I want homophobia to go the way of smallpox and never return.

Jeremy Rodriguez is a staff writer at Philadelphia Gay News.

These ‘RuPaul’s Drag Race’ playing cards are a total win

Katy Perry helped a woman propose to her girlfriend on-stage