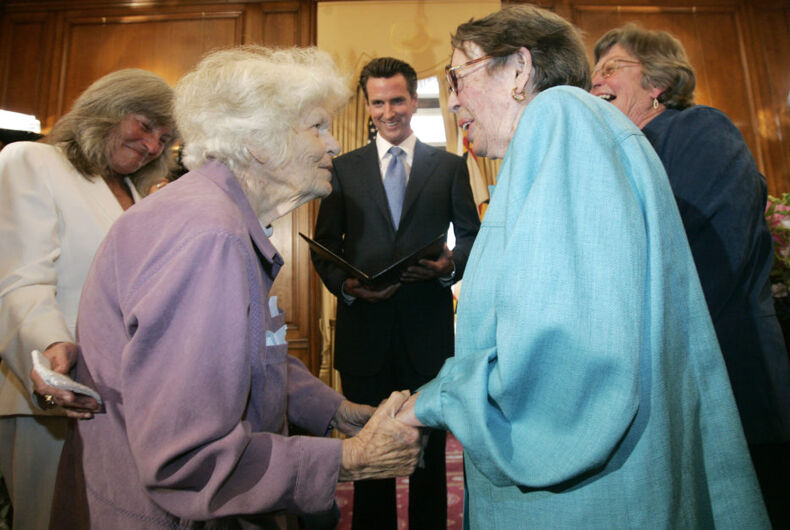 In a time when President Donald Trump has directed a ban on transgender individuals from serving in the military, his administration has rescinded protections for trans students in public schools and the advancement of LGBTQ national historic landmarks are in question, the stories of those who fought for equal rights in an earlier era seem to be more important than ever before.

One such story is that of Phyllis Lyon and Del Martin, who ushered in the modern lesbian movement and made history by becoming the first same-sex couple married in San Francisco — twice. Their accomplishments as activists and the love they shared have become a symbol of perseverance, strength and hope for the LGBTQ community.

“If you got stuff you want to change, you have to get out and work on it,” said 93-year-old Lyon. “You can’t just sit around and say, ‘I wish this or that was different.’ You have to fight for it.”

Lyon is still a beacon of strength, wit and charm as she reminisced about her younger years. Although Martin died in 2008 at age 87, Lyon still lives in the couple’s one-bedroom home nestled in the hills of Noe Valley, which they shared for more than 50 years.

“I can’t be out galloping around like I used to, getting stuff done,” said Lyon as she sat in her living room during a recent interview with the Bay Area Reporter. Decades ago, the room served as a gathering place for lesbians during a time of social conformity, when the lesbian community only had a handful of bars in the Castro district in which to meet and socialize.

“Oh, gosh, we used to have dance parties here all the time,” Lyon recalled, smiling.

Although Lyon said she has not considered submitting her home to become a national or local landmark after she passes, one step inside the cozy abode reveals the couple’s history-making life, seen through countless pictures, knickknacks and newspaper clippings.

Kendra Mon, Martin’s only child from her first marriage, remembers spending summers at the couple’s home when she was a student at UC Berkeley. Over the years, Mon has come to understand the important role her mother and Lyon played in the lesbian community, something she didn’t quite grasp as a young adult.

“Lesbians would call the house from all over the world,” said Mon, a retired mother of two who lives in Petaluma, Calif. “A lot of their friends were scared at that time. Mom gave them a place where they could feel safe.”

When former San Francisco Mayor Gavin Newsom ordered city officials to issue marriage licenses to same-sex couples in February 2004, the “Winter of Love” was unleashed, as images of happy gay and lesbian couples lined up outside City Hall were beamed into living rooms across the country, and around the world. But that day, Feb. 12, started off with a quieter ceremony inside a City Hall office, where Newsom married Lyon and Martin, as LGBT community leaders and others looked on.

Ultimately, the California Supreme Court ruled several months later that those 2004 marriages were invalid because Newsom had exceeded his authority. Lyon and Martin — and the thousands of others — would have to wait four more years, when the same court in May 2008 overturned Proposition 22, a same-sex marriage ban, and said that denying marriage rights to same-sex couples violated the state Constitution. Wedding bells began ringing in the Golden State in June.

(The same-sex nuptials were halted in November of that year, after state voters passed the Proposition 8 marriage ban. After years of legal wrangling, the U.S. Supreme Court in June 2013 tossed out Prop 8 on a technicality and same-sex marriages resumed in California.)

Martin and Lyon were the first same-sex couple to be married in the city in 2004 and 2008. Framed, yellowed San Francisco Chronicle articles of the couple’s historic weddings grace the walls of Lyon’s well-lit living room. The headlines read, “Wedding Bells to Ring in a New Era” and “The Wait is Over.”

“We got it started for everybody else,” Lyon said of her 2004 wedding. “We didn’t get married just for us. We knew it was important to a lot of other people.”

Although their first marriage was ended after 181 days, it didn’t stop the couple from continuing their fight. Martin and Lyon exchanged vows again on June 16, 2008.

The matching pink and blue suits the couple wore are now in the permanent collection in the archives of the GLBT Historical Society.

A longtime friend of both women, Kate Kendell, executive director of the National Center for Lesbian Rights, personally asked Lyon and Martin to be the first same-sex couple to wed in 2004.

“I called the house and Phyllis answered the phone. I told her I needed them to do one more thing for the movement,” Kendell said, recalling it to be a humorous conversation, after Lyon put her on hold to ask Martin. They said yes a few minutes later.

Kendell attended both marriage ceremonies, an emotional experience for her.

“I burst into tears, as did other staffers,” she said. “You knew you were a part of something historically very important standing there.”

For someone who grew up in a time where lesbianism was seen as “immoral, sick and illegal,” Lyon said she never believed she would live long enough to marry her “sweety-puss” and the love of her life, as she called Martin, let alone see same-sex marriage legalized nationally. But sure enough, in a landmark decision on June 26, 2015, the U.S. Supreme Court ruled that same-sex couples could marry in all 50 states.

“I think we’ve made tremendous progress,” said Lyon, laughing about how she is still amazed that people don’t fall over dead when she tells them she is a lesbian. The incredible accomplishments of Lyon and Martin no doubt played a role in the progress of the LGBTQ community in San Francisco and beyond. When Martin died, then-House Speaker Nancy Pelosi (D-San Francisco) famously said, “We would never have marriage equality in California if it weren’t for Del and Phyllis.”

Martin began working as an activist after receiving her degree in journalism from UC Berkeley. While working at a newspaper in Seattle, Martin met Lyon in 1950 and the two began working on behalf of lesbians in their community, health-care access, advocacy on behalf of battered women and issues facing elderly Americans.

Together more than 50 years, the couple founded the Daughters of Bilitis in 1955, the first social and political organization for lesbians in the United States. In 1956, they started a newsletter called the Ladder, which grew into a publication about lesbian politics and culture and became a lifeline for hundreds of women isolated and silenced by the restrictions of the era.

Martin also became an activist for the feminist movement in 1963 when she was the first out lesbian to serve on the board of directors of the National Organization for Women. The women were pioneers, tireless activists and together a symbol of what it means to fight for equality and love in the LGBTQ community.

Their many contributions over the past five decades are credited with shaping the modern LGBT movement.

In 2005, Lyon and Martin were inducted into the National Lesbian and Gay Journalists Association’s LGBT Journalists Hall of Fame.

“No, we are not back in the 1950s, but we are facing some of the most threatening and dangerous times, certainly in my lifetime,” Kendell said of the Trump administration’s lack of support of the LGBTQ community. “Phyllis and Del are examples of how you live during difficult times. I look to them as an inspiration, a north star of how you show up, you fight and be present.”

Lyon plans to donate some of the items in her home to the Smithsonian Institute after she is gone, but, as Kendell said, the memory and legacy of Martin and Lyon live on through their writings, perseverance and love for one another.

Alex Madison is a freelance reporter for the Bay Area Reporter.

Is Jeff Sessions intervening in a transgender hate crime case as a publicity stunt?