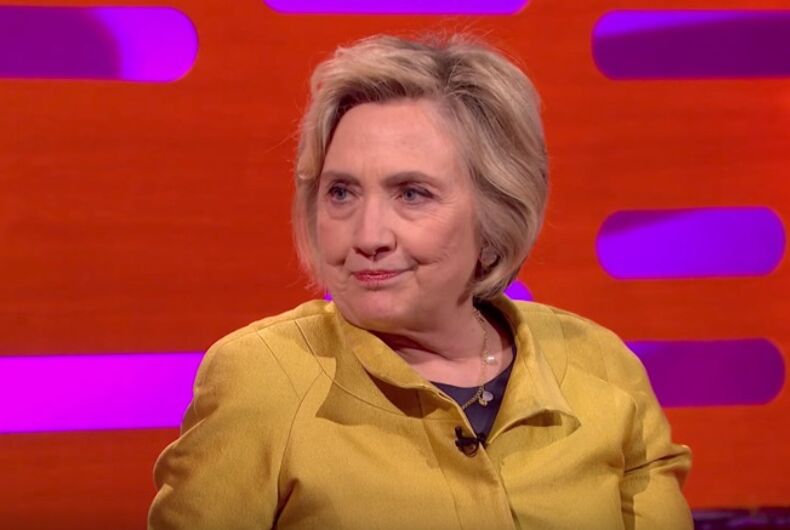 With a headline like “Hillary Clinton uses obscenity on TV describing reaction to Trump’s inaugural speech,” you could be excused for thinking she went on an expletive laden rant. But Fox News’ headline is exactly what’s wrong with the right wing outrage machine.

Appearing on the British late night talk show, The Graham Norton Show, Clinton and the out gay host, started chatting about the Trump inauguration and her attempt to get out of attending. (Because, seriously, would you want to go? You didn’t even run against him and the ceremony probably turned your stomach.)

Clinton recounts that she and her husband, former President Bill Clinton, thought they might have found a way out, but it depended on what the other former presidents would do.

“We thought, okay maybe others aren’t going, so we called the Bushes, and the elder Bushes were in the hospital, which I think was legitimate,” she said as the audience laughed. “So then we called the younger Bushes and they said ‘yeah we’re going’.”

When the Carters told them they would also attend, the Clintons knew they were stuck. But when she talked about Trump’s inauguration speech, she told a quick anecdote that has the right wing in an uproar.

“I was sitting next to George W. Bush and Bill was on my other side and we were listening to this really dark, divisive speech that I describe as a ‘cry from the white nationalist gut. I was so disappointed. Really so, so sad that it wasn’t an outreach; it was a narrowing and a hammering of what he had said before,” she told Norton.

“It was reported that George W. Bush, as it ends, said, ‘That was some weird shit’,” she said as the audience roared.

And it was,” Norton replied.

Despite the headline, the actual Fox News article devotes about half of one sentence and the quote from Bush to justify the hand wringing. The rest of the piece is about her thoughts on Trump’s tweets and her attempt to avoid the inauguration.