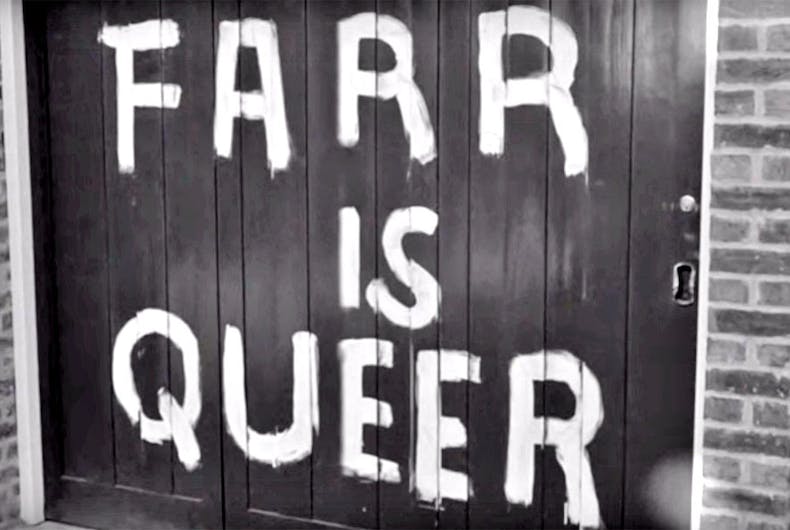 Still from the 1961 movie "Victim"Photo: screenshot

In 1961, Christopher Coates was sitting near a schoolboy on the upper deck of a London bus. As the bus passed a movie theatre, the boy “whispered hoarsely to his chum: ’That’s a film about (pause) queers’!”

Then twenty-year old Eddy remember, “On entering the cinema everyone was given a close scrutiny by two men who I assumed were plainclothes police.” Under-age P.M. Scott remembered “walking around the block several times before I could pluck up the courage to go in. I knew the majority of the audience would be gay but to face the cashier to buy a ticket was my first ‘coming out’ statement.”

John Bennett was 17 and still in school when he slipped into a showing in a small town about 35 miles from London. “My first impression was an overwhelming sense of identification with the gay characters. The diversity of types was very liberating for me. I am certain it had a very positive effect on me as a teenager. I saw a rerun on television some two years ago and ended up crying for most of the last half hour!”

The film was Victim, and those memories gathered last year by Stephen Bourne in Brief Encounters. Viewed today, its prim and proper tone (the result of line-by-line prior negotiation with film censors), with same-sex talk but no same-sex acts, and with multiple deep in the closet characters saying things like, “Nature played a dirty trick on me,” it can be seen as homophobic rather than a positive landmark.

But as Bourne’s eyewitnesses attest, that’s what it was when, as Coates also remembered: “In 1961 homosexuality was never mentioned or discussed in my middle-class environment. If it was, it was viewed as nasty, disgraceful, unacceptable.”

Eight years before Stonewall might as well have been eighty.

The previous decade had seen a sharp rise in prosecutions for “gross indecency,” including that of Alan Turing, and the government’s Wolfenden Report which recommended that “homosexual behaviour between consenting adults in private should no longer be a criminal offence” had been gathering dust on the shelf for seven years when the producers of an earlier film on racism decided to attack the law by dramatizing what it had become, “the blackmailer’s charter.”

In the United States, laws which could carry a prison term thirty times the maximum in Great Britain provided their own charter, and in 1961 a blackmail ring was “fairy shaking” from coast to coast. By the time they were busted in 1965, they had extorted some $2,000,000 ($15 million in 2017 currency) from over 1,000 men. Ironically, one of their victims was a prominent British film producer, and another, Navy Admiral William Church, cousin of then-US Senator Frank Church, committed suicide.

One of its ringleaders, Ed Murphy, became a bouncer at the Stonewall Inn where he was thought to be involved in another extortion racket. According to Stonewall author David Carter: “At least one of the victims, probably more, worked on Wall Street and stole bonds and securities to pay the blackmail. And that, eventually led to the determined police effort to shut down the bar” in June 1969.

Victim’s trailer was intentionally vague. “What crime links him to this frightened boy?” Some gay men went only knowing it starred their favorite leading man. Others had seen enough leaks in the press that when Ken Rhodes went on opening day he found “a long queue stretching round the alley beside the cinema.”

The film’s first shock was hearing a character actually say the word “homosexual” – the first time it had ever been used in a film.

Sadly, it got only limited release in the United States after being denied a seal of approval for use of the H-word and because of its “overtly expressed pleas for social acceptance of the homosexual, to the extent that he be made socially tolerable”—but “faggoty-looking white shoes” in publicly closeted Lorraine Hansberry’s script for A Raisin in the Sun was okayed.

And far more American than British reviewers were disapproving. Time magazine called it “A plea for perversion. Nowhere does the film suggest that homosexuality is a serious (but often curable) neurosis that attacks the biological basis of life itself.”

Pauline Kael wrote she was, “beginning to long for one of those old-fashioned movie stereotypes – the vicious, bitchy old queen who said mean, funny things. We may never again have those Franklin Pangborn roles, now that homosexuals are going to be treated seriously, with sympathy and respect, like Jews and Negroes.”

She added, “A minor problem in trying to take Victim seriously even as a thriller is that the suspense involves a series of ‘revelations’ that several of the highly-placed characters have been concealing their homosexuality; but actors, and especially English actors, generally look so queer anyway…”

The main character, not a vicious, bitchy old queen but linked to the frightened boy, was “Melville Farr,” a married, highly respected and successful attorney on his way up who had always resisted his attraction to men. Contrary to mythology, their first choice to play him had always been the late Dirk Bogarde, someone forgotten today save by cinephiles but who, after 35 films, was, in the words of Gore Vidal: “the heart-throb of all England. The whole public of an entire country knew who he was.”

What none of the public knew – and made his taking the role all the more remarkable – was that Bogarde, himself, was gay; his “manager” was also his lover of several years.

He was entirely right when he said, “I knew a lot of people would far rather see me kill my wife on screen than play the barrister.” Still he got mostly rave reviews as the first character on screen willing to lose his career to fight for the right of gay/bi men to be left alone.

Despite such praise (and more for playing another gay character twenty years later in Death in Venice), despite a permanent place on gay liberation’s list of heroes, and receiving a handwritten thank you note for the positive role Victim played in passage of the 1967 bill that finally legalized sex in private between males over 21 in England and Wales from its sponsor (whose gay brother had committed suicide), Bogarde remained his own victim.

Thirty-eight years after the film’s release, he went to his grave still publicly denying he was gay.

Of course, decriminalization has not entirely erased the vulnerability to social disapproval many LGBs still feel. Police in Australia have been investigating attempts to blackmail users of gay hookup apps.