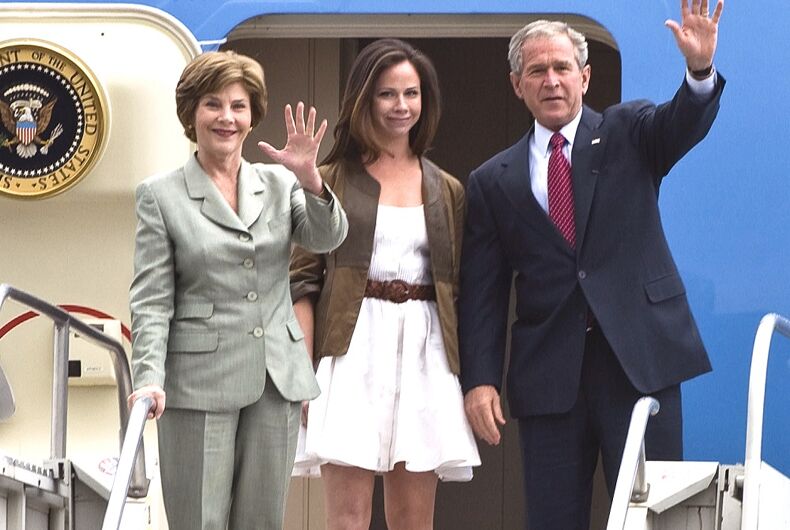 Barbara Pierce Bush, one of former president George W. Bush’s daughters, said that she had a conversation with her father about marriage equality when she was 16.

Jenna Bush Hager and her sister have co-authored Sisters First: Stories from Our Wild and Wonderful Life, a memoir about their lives growing up as the daughters of a president and the granddaughters of another president.

One of the stories in the book is about a conversation that Barbara had with her father in 1997 or 1998. She wrote that he was generally “accepting and tolerant” of other people but “not comfortable with the idea of gay marriage and its implications.” She does not expand on what that means.

During the argument, she said that her father remained calm, but that she stormed off by the end.

“My dad may not have changed his mind that evening,” she wrote, “but neither did he try to change mine.”

Indeed, she did not change his mind. Both of his presidential campaigns reeked of homophobia, with the 2004 campaign remembered by some LGBT activists as the most homophobic election in recent history.

Bush campaigned on a constitutional amendment that would have banned the federal government and every state government from recognizing marriage between two people of the same sex or even granting the same rights to same-sex couples. Anti-LGBTQ hatred was a key part of Bush’s get-out-the-vote strategy.

Since leaving office, Bush has never come out in support of marriage equality, even when he was directly asked about it in 2013. Even though his wife and his daughter have publicly stated that they support equal rights for LGBTQ people and his father attended the marriage of a lesbian couple and signed their marriage certificate as a witness, W. just refuses to right the wrongs of his 2004 campaign.

Barbara wrote in her book, “I believed that one conversation would be all it took to change is mind.” She was 16 and naive.

Sisters First will be released October 24, and the Bush sisters are going on tour to promote the book. They say they decided to write it after the morning after the 2016 presidential election, when it was announced that Donald Trump had won and they needed “comfort.”

“We felt like the time was right to talk about women lifting each other up,” Jenna told Vanity Fair.

Oddly, the time was only “right” exactly when it became too late for such sentiment to actually change anything. Neither sister publicly endorsed Hillary Clinton for president.