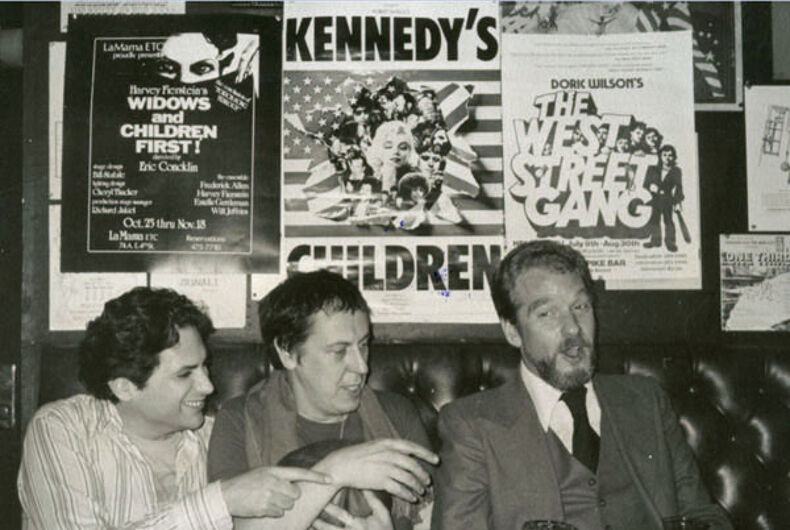 LGBTQ Nation: Because your parents were migrant workers in Texas and moved around so often in search of new jobs, you never finished a year of school until your senior year.

Robert Patrick: I fiddled around as a child, drawing comics in school tablets and making up little songs, but with the onset of puberty, I suddenly began writing completed songs and poetry in great numbers. My childhood loneliness certainly made me appreciate the Caffe Cino and off-off Broadway, not only for their artistic opportunities, but for the gregarious friendliness of the artists and patrons, who were my first “family of friends.”

QN: How supportive was your father of you when you grew up?

RP: My biological father turned into an ugly drunk after a telephone pole he was working on fell and crushed his legs. He beat us until someone asked my mother why she didn’t call the police. She replied, “Can I?” She didn’t know women had any retaliation against such things. She had him arrested and he disappeared from our lives until Mother once decided to return to him, taking me with her. He got drunk, beat me and left me for dead. I saw him just twice after that and was scared to death to be near him.

QN: Did any people with fundamentalist religious beliefs ever attack you for your atheism?

RP: The only religious attack I can recall was when my stepfather, for what he called “blasphemy,” broke my nose with a cast-iron crucifix. I was in my early 20s. I fled but had nowhere to go, so I secretly sneaked back in and slept in my closet for a few days.

QN: As a young man, you joined the Air Force, but got kicked out after two weeks because a love poem was found in the wallet of another airman.

RP: Roswell, New Mexico’s resident homosexuals often had affairs with lonely airmen from the local Air Force base. Me and my best friend, George, each had a “flyboy” lover. Our lovers discovered each other and dropped us. I was such a romantic that I joined the Air Force in San Antonio, Texas, just to be in the same branch of the service with mine, Bobby. After about two weeks, I was called into a tiny, file-filled shack and told that I was being discharged dishonorably because they had found my poem in Bobby’s wallet.

QN: After the Air Force affair, you chose to commit yourself to a mental institution.

RP: I simply couldn’t get along anywhere. My family’s constant moving had left me without social skills at friendship, school, and work situations. My obsessive absorption in the arts left me without means to relate to people whose interests were family, work, and religion. The enforced secrecy of my sex and love lives mitigated against stability and lasting relationships. I alternated between trying to bully or charm people into sharing my arts interests and clumsily attempting to ingratiate myself by imitating their behavior.

QN: What did you experience at that institution?

RP: There was a padded cell in one corner occupied by a muscular young man who spent all his time screaming and cursing and banging the padded walls. An orderly confided to me that this patient was the son of a rich politician who had arranged that the youth, his son, be institutionalized, rather than jailed for some ghastly drunken auto accident he had caused. The orderly also hinted that the guy was gay. This is reflected in one speech in my play Nice Girl, when a character explains why he fled his small New Mexico town: “Rich people in this state with queer kids can get them thrown into an asylum for life, do you know that? We were like Jews in Nazi Germany, we lived in terror.” [My stay] was extremely interesting, but at two weeks to the minute, they discharged me, saying, “There’s nothing wrong with you. Just move to a bigger town.”

QN: On a visit to New York, you followed a young man into Caffe Cino, unaware that you had entered what was to become the birthing place of both off-off Broadway and gay theater. Playwright Lanford Wilson, your roommate, wrote The Madness of Lady Bright, which was to become the first gay play in America. Seven months later, you wrote your first gay play, The Haunted Host (1964) — contributing to a whole new movement.

RP: We were not consciously or programmatically creating gay theater. The freedom Joe Cino gave to playwrights just happened to give us the courage to write what was on our minds, and we both had gay stories we wanted to tell. So, it turned out, did several other writers at the Cino.

QN: When homosexuality was still a de facto crime in New York, owners of gay establishments like Caffe Cino who wanted to keep their theaters running were forced to do so through illegal activities. Some corrupt police officers apparently demanded bribes and sexual favors for protection of the establishment. Could you tell us more about some of those clandestine activities that you observed?

RP: I once saw a cop come out of the back room of the Cino zipping his pants and tucking $10 into his pocket. That’s my only acquaintance with such things. We always suspected Joe’s Sicilian relations had something to do with the Cino not being harassed. After Joe’s death, we received summonses daily.

QN: In the early days of American theater and film, most black and gay characters were stereotyped. Your plays, including Kennedy’s Children, were performed not only in the gay and pro-gay environment of the Village, but also on Broadway, in London, and Amsterdam, which seemed to exist almost in a vacuum at that time. How do you explain the movement toward a much wider portrayal of gay people and other minority members in our own time, 50 years later?

RP: The spread of education — with many more people going to college – and reading history, and through radio and TV and newsreels — knowing more about the world than our parents did.

QN: Given the many remarkable things that you’ve done in your life, is there anything you have not done, but would like to experience?

RP: True love. And I would like to have the money to build or buy a theatre in L.A. with enough ground space that I could call it “Robert Patrick’s Free Parking Theatre,” because in L.A., the theater would fill up for every performance no matter what show was on, just because of the magic words “free parking.” Then I could do whatever plays I liked.

Henrik Eger is editor of Drama Around the Globe and author of Metronome Ticking and four textbooks. Born and raised in Germany, he earned a Ph.D. in English from the University of Illinois and went on to teach English and communications on three continents.

What left-handed people can teach the LGBTQ community