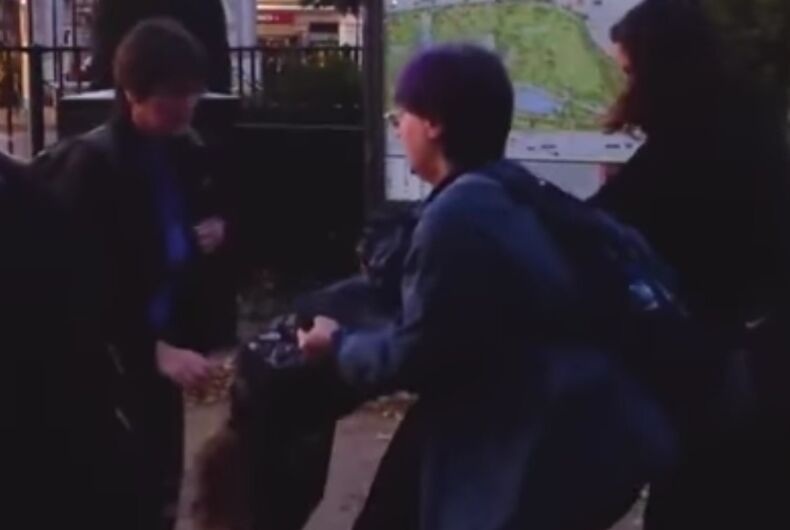 Maria MacLachlan, who identifies as a “gender critical feminist,” was at Speaker’s Corner, a place in Hyde Park where people often engage in speeches and open air discussion. She was waiting for the location of an event called “What is Gender?” to be announced.

The “What is Gender?” event featured speeches by Miranda Yardley, Julia Long, and Venice Allan. Each of those speakers has a history of transphobic commentary. Yardley is a transgender activist who says that trans women should self-identify as men, Long wrote a column for The Guardian about her activism for “women-only spaces” that excluded trans women, and Allan’s Twitter feed is a cesspool of transphobia, including an argument that LGBTQ organizations should be de-funded for supporting transgender rights.

MacLachlan said that about 50 so-called TERFs (Trans-Exclusionary Radical Feminists) were waiting there to find out the secret location of the event. Protestors, organized by LGBTQ+ Society from Goldsmiths University, Sisters Uncut, and Action For Trans Health London, were also there.

She told the Daily Mail, “These studenty-looking types were turning up and some arguments started to take place but I kept well out of it.” She then decided to record the protests on her phone.

Another person recorded video from further back and posted an edited version on YouTube with commentary of questionable accuracy.

Although the video isn’t very clear, it appears that one of the trans protestors tried to slap MacLaclan. Just after that, another protestor grabs her phone and throws it to the ground to break it. MacLachlan tried to hold that person, and the protestors started chanting “When TERFs attack, we fight back.” Another protestor punched her on the arm to try to free the protestor that she was holding.

Her phone was broken, the memory card was stolen, and she left with a bruise on her face. “I didn’t go to hospital but it has really shaken me up.”

A 60-year-old woman has been beaten up by 4 Trans activists in Hyde Park. Footage out later. As can see one side of her face is purple. pic.twitter.com/kmoDMLFXTY

The event later took place at the University Women’s Club in Mayfair. Protestors found the location and protested outside of it.

In a statement, Action for Trans Health London said: “We condemn violence against women in all forms. We’re proud that many self-organising activists, allies and supporters stood against hatred, misogyny and intimidation.”

Conservatives are outraged by this cute potato ad