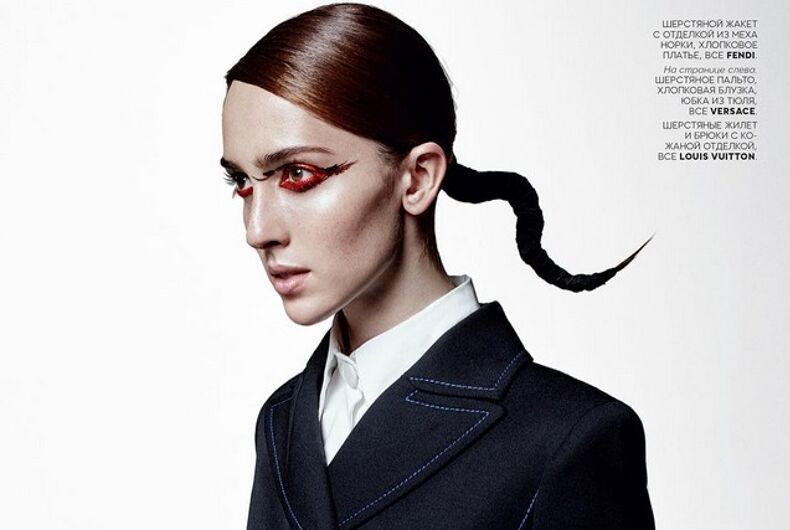 Teddy Quinlivan, who has modeled for Marc Jacobs, Gucci, and Oscar de la Renta and recently walked the runway at New York Fashion Week (NYFW), came out as transgender in an interview with CNN.

“I’ve decided to reveal my trans identity because of the political climate in the world right now – particularly in the United States,” she said. “We made an amazing progression under the Obama administration, and since the new administration took office there’s been a kind of backlash.”

“There’s been violence against transgender people – particularly transgender women of color – since before I even knew what transgender was,” she continued. “I just felt a great sense of urgency. I’m very fortunate to be in (a) position (that) I never really thought I would be. It’s really important to take advantage of a time like this.”

In 2015, she was discovered by Louis Vuitton’s creative director, and her career at age 23 is going well. She said that, because she won the “genetic lottery,” no one in the industry thought she wasn’t cisgender.

“I’m definitely a little bit nervous, because I’ve been presenting as cisgender for so long. Since I transitioned when I was 16, I’ve been living as a cis female… I was very lucky, because I won the genetic lottery – I looked a certain way and my voice hadn’t dropped. That privilege gave me a lot of confidence to walk down the street, date and (work) in the fashion industry, where people I would presume I was a ‘normal’ girl.”

Designer Marc Jacobs has expressed support for Quinlivan. “I respect, admire and support Teddy’s decision to come out as transgender. Now more than ever it is vital that we pledge our allegiance to the LGBT community and use our voices to encourage and inspire acceptance, equality, understanding and love,” he wrote in a statement.

Here is an interview with Quinlivan where she talks about her love of fashion and spy movies.

Trans activists and transphobic feminists violently clash at a protest