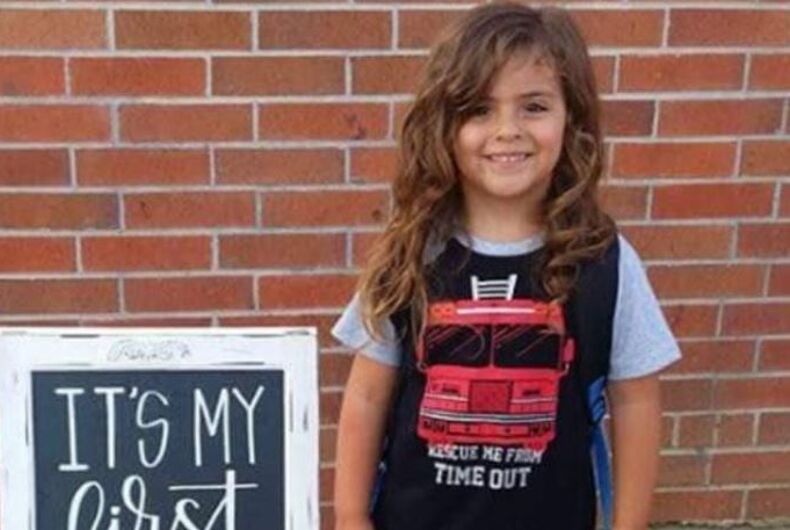 A school district wants this boy to cut his hair and his mother is pushing back. Photo: Twitter

A mother in Texas was told her 4-year-old son was not welcome to return to Pre-K until his long hair was cut short.

Jessica Oates told CW 39 she hoped the school, Barbers Hill IDS in Mont Belvieu, Texas, would make an exception to its dress code, which includes a ban on boys having long hair.

“My family is American-Indian. We are Cocopah Indian and that was the documentation that I was going to provide for the reason for my son’s long hair. It’s a signal of strength,” Oates said.

“I had the principal contact me and state that documentation would no longer be enough. Apparently, the school board is a stickler for rules and can’t think of any religions or cultures that would require long hair,” she added.

Oates said her son, Jabez, was excited to go to school and is now confused as to why he can’t return.

The single mother works full time, takes care of a sick relative, and is looking for a second job, making home schooling not a viable option for the family.

Oates tried to compromise by putting her son’s hair up in a bun, but was told the black hair tie used to hold it in place was “an inappropriate hair accessory.”

She said she has received a lot of negative attention locally simply for sticking up for her son.

“I’ve gotten a lot of backlash from the community about this. It has been vile. A lot of people have told me to move and get out of here,” she reported.

“Barbers Hill ISD believes in the sanctity of local control,” Dr. Greg Poole, Barbers Hill ISD Superintendent, said in a statement. “Our policies, including expectations of appearance, are fashioned by our Board of Trustees, all of whom are taxpayers in the Barbers Hill school district and have had children attend our schools.”

“Parents have a right to seek an appropriate educational setting for their child, just as Ms. Oates has the right to place her child in a district that reflects her personal expectations for standards of appearance,” he added. “There are procedures in place for addressing concerns over policy if it is Ms. Oates’ desire to have her son educated in Barbers Hill ISD. But we would and should justifiably be criticized if our district lessened its expectations or longstanding policies simply to appease.”

Will the racist Trump administration kill plans to put Harriet Tubman on the $20 bill?