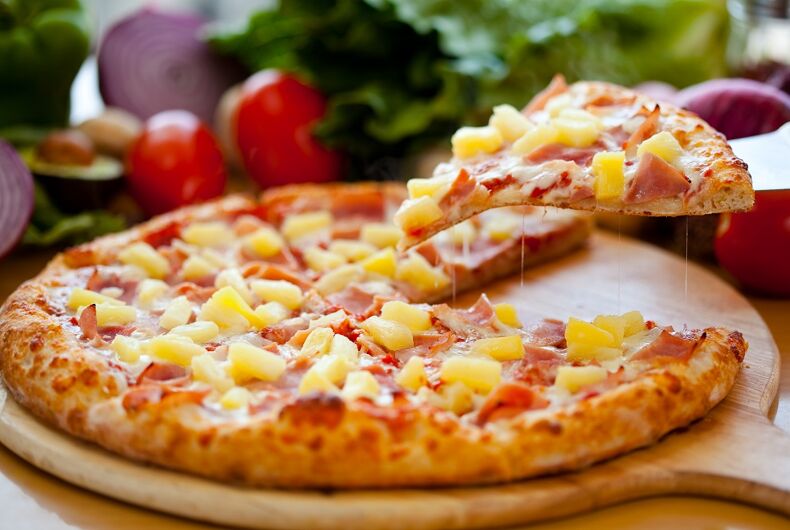 A pizza shop in Australia turned a billboard above their store from a message of hate to one about pizza choice.

Wiseguise in Launceston, Tasmania, has a billboard above it. That ad space was bought by the ineptly-named Coalition for Marriage, an organization working to prevent people from getting married by encouraging Australians to vote “no” in a nonbinding referendum on marriage equality.

The billboard reads, “It’s OK to say ‘no.'” So workers at the pizza shop painted “to pineapple on pizza!” on their building to take the sting out of the message.

The owners of a pizza shop in Launceston have painted around an anti-same sex marriage billboard on their building. @abcnewsTas pic.twitter.com/bQjSg3huZk

Wiseguise managing director Alex Jones said that he was worried the billboard would have a negative impact on the business, since people might believe that the billboard speaks for the restaurant’s owners.

“We try not to have a political point of view as a business, so I think we’ve taken the stance away from it,” Jones said. He said that it took about three hours for him and his employees to finish the sentence.

The anti-gay side’s strategy in the Australian referendum has been to make homophobia seem more acceptable, because antipathy for LGBTQ people is the main reason some people oppose equal rights for LGBTQ people. This billboard just assumes that the reader already doesn’t like gay people and is just afraid of the social consequences of expressing that hatred… like how pretty much every bigot assumes that everyone agrees with them but is just unwilling to say it.

Jones’s message, though, is actually about choice; according to their website, Wiseguise offers pineapple pizza.

Two students were kicked off the school bus for being transgender