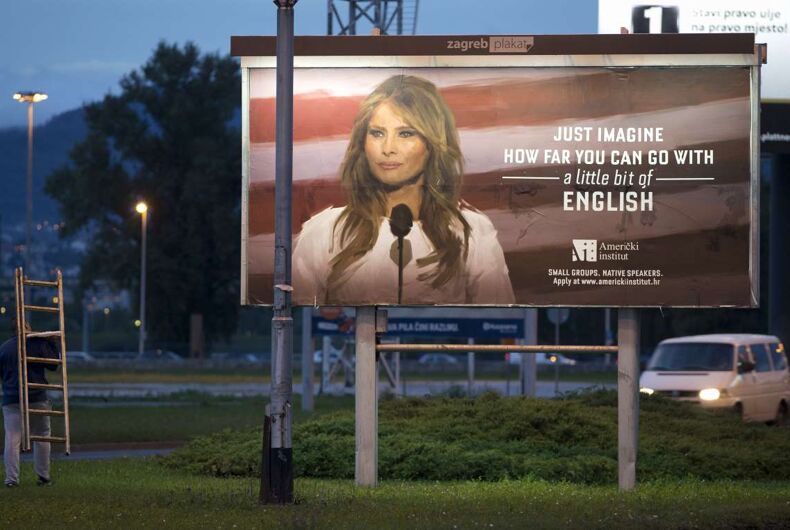 A billboard that has Melania Trump ready to sue.Photo: Facebook

It’s not easy being Melania Trump. Not only is she married to one of the most despicable men in the world, she’s become a laughingstock herself.

A private school in Croatia has Trump up in arms after it displayed billboards offering English lessons that used a photo of her in front of a waving American flag. The sign reads, “Just imagine how far you can go with a little bit of English.”

Trump, who is from neighboring Slovenia and speaks with a heavy accent, was not amused. The billboards were removed this week.

The school has apologized and they swear they didn’t mean it as an insult.

“We are very sorry that the billboards were misunderstood as something intended to mock the U.S. first lady,” Ivis Buric, a spokeswoman for the school, told the Associated Press. “It was meant to be something positive, to show her as a role model.”

Trump fled Slovenia’s poverty in her 20s to become an international model. She became Donald Trump’s third wife in 2005 and quickly became a United States citizen; she is decades younger than the lecher-in-chief.

Trump’s first wife, Ivana, was also a foreign-born model who was naturalized after marrying him. Looks like learning English helped her too. Maybe she’s available for endorsement deals.