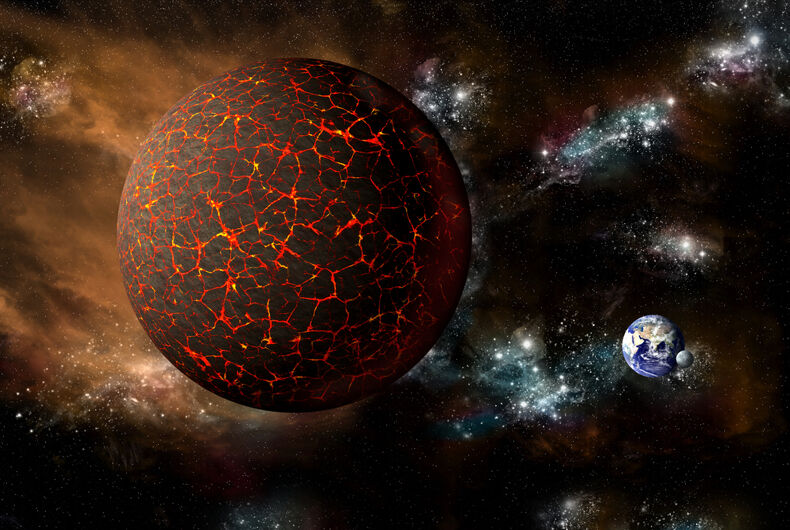 A depiction of the mythical planet known as Nibiru or Planet X as it hurtles toward a cataclysmic rendezvous with Earth.Photo: Shutterstock

Christian numerologists are predicting the world will end on Saturday, September 23, so plan on having one helluva church service on Sunday. After delving deep into certain cherry-picked verses and their in-depth knowledge of the so-called “Planet X.”

David Meade says verses in Luke 21:25-26 definitely could-be maybe interpreted to reference the recent hurricanes that hit the United States and the solar eclipse that also happened in the United States. He did not say why ancient Jews would be prophesying about events halfway across the globe in a land that they didn’t know existed, but here we are anyways.

He says that a “date marker” on the pyramids of Giza along with some other random Bible verses helped him pick Sept 23 as Doomsday. He says the mysterious “Planet X” will pass too close to Earth, causing massive earthquakes, tsunamis, and volcanic eruptions. NASA, on the other hand, says anyone who believes in Planet X is an idiot.

In case you’re interested, the Bible verses from Luke read:

“25: There will be signs in the sun, moon and stars. On the earth, nations will be in anguish and perplexity at the roaring and tossing of the sea. People will faint from terror, apprehensive of what is coming on the world, for the heavenly bodies will be shaken. 26: Men’s hearts failing them for fear, and for looking after those things which are coming on the earth: for the powers of heaven shall be shaken.”

Here’s another Bible verse that perhaps Meade, in all his crazed rantings, may have missed. It’s from Deuteronomy 18:10-12:

“10 There should not be found in you anyone who makes his son or his daughter pass through the fire, anyone who employs divination, anyone practicing magic, anyone who looks for omens, a sorcerer, 11 anyone binding others with a spell, anyone who consults a spirit medium or a fortune-teller, or anyone who inquires of the dead. 12 For whoever does these things is detestable to Jehovah, and on account of these detestable practices Jehovah your God is driving them away from before you.”

But, you know, PLANET X!!! Get your affairs in order, people.

Why is only one of a gay couple’s twin sons considered a United States citizen?