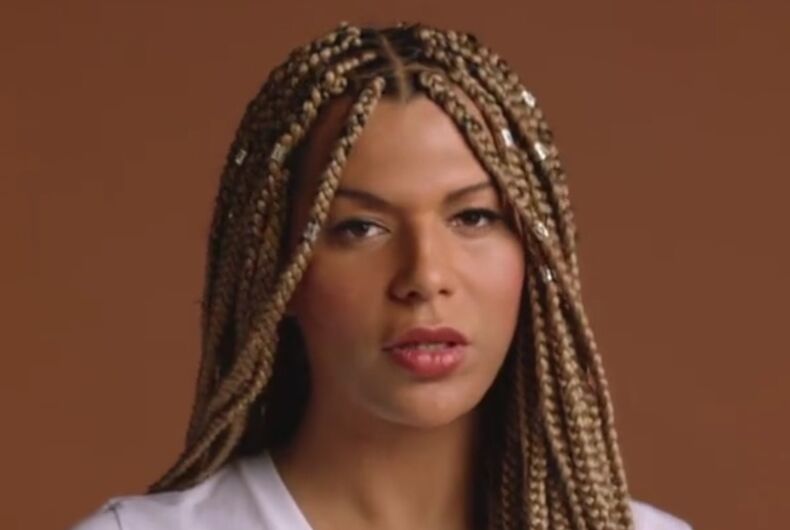 This past week, London DJ and activist Munroe Bergdorf became the first transgender model hired by L’Oreal Paris as part of the company’s “True Match” campaign to celebrate diversity.

But on Friday, L’Oreal fired Bergdorf following media controversy around a Facebook post she wrote about the Charlottesville white supremacist rally.

The Daily Mail, a tabloid in the UK, wrote about her post.

In a lengthy Facebook rant, she wrote: ‘Honestly I don’t have energy to talk about the racial violence of white people any more. Yes ALL white people.

‘Because most of ya’ll don’t even realise or refuse to acknowledge that your existence, privilege and success as a race is built on the backs, blood and death of people of colour. Your entire existence is drenched in racism. From micro-aggressions to terrorism, you guys built the blueprint for this s***.

‘Come see me when you realise that racism isn’t learned, it’s inherited and consciously or unconsciously passed down through privilege.

‘Once white people begin to admit that their race is the most violent and oppressive force of nature on Earth… then we can talk.

‘Until then stay acting shocked about how the world continues to stay f***** at the hands of your ancestors and your heads that remain buried in the sand with hands over your ears.’

The Mail implied that the post was from this past week, saying that Bergdorf wrote it “days after” she was hired by L’Oreal.

L’Oreal was quick to separate itself from Bergdorf. On Friday, the company announced that it was cutting ties with the model.

L’Oréal champions diversity. Comments by Munroe Bergdorf are at odds with our values and so we have decided to end our partnership with her.

Bergdorf fired back with a long Facebook post, where she claimed that the Mail took her words out of context. “This ‘rant’ was a direct response to the violence of WHITE SUPREMACISTS in Charlottesville,” Bergdorf wrote. “It was not written this week.”

She stood by her disgust with racism. “Slavery and colonialism, at the hands of white supremacy” built the British Empire, she said, and asked people with lighter skin to be aware of the “social privileges” that history of racism created.

She said that she does not believe that white people are genetically racist.

When I stated that “all white people are racist”, I was addressing that fact that western society as a whole, is a SYSTEM rooted in white supremacy – designed to benefit, prioritise and protect white people before anyone of any other race. Unknowingly, white people are SOCIALISED to be racist from birth onwards. It is not something genetic. No one is born racist.

She goes on to accuse the beauty product industry of ignoring customers of color. “The fact that up until very recently, there has been next to no mainstream brands offering makeup for black women and ethnic minorities, is in itself due to racism within the industry. Most big brands did not want to sell to black women.”

Now Bergdorf is calling for a boycott of L’Oreal. “Sit still and smile in a beauty campaign ‘championing diversity,'” she wrote on Facebook yesterday. “But don’t actually speak about the fact that lack of diversity is due to racism. Or speak about the origins of racism. It’ll cost you your job.”

Miley Cyrus got emotional on ‘Ellen’

Two men were beaten and bitten because they kissed in public