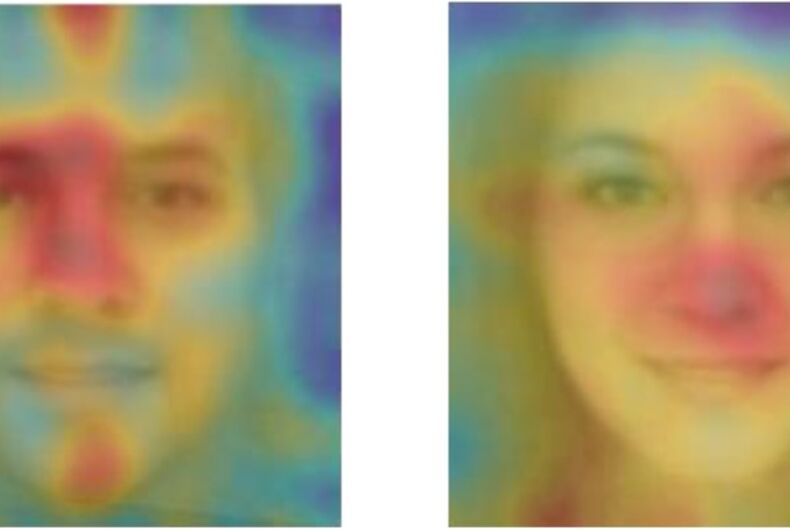 The model was used to produce a heat map of what parts of the face provided more information about a subject's sexuality.Photo: Wang and Kosinski

Yesterday I posted about a study by two Stanford University researchers, Michal Kosinski and Yilun Wang, that found that a computer program could assign a probability that someone is gay or straight with a surprising level of accuracy, just based on a picture of their face.

HRC and GLAAD, for some reason, decided to denounce this study. I agree that it’s not a complete picture of what LGBTQ people look like – I wrote as much in my post yesterday – and the researchers themselves cautioned against making sweeping generalizations from their study.

“Technology cannot identify someone’s sexual orientation. What their technology can recognize is a pattern that found a small subset of out white gay and lesbian people on dating sites who look similar. Those two findings should not be conflated,” said GLAAD’s Jim Halloran.

Um, OK, that’s how science works: researchers have a theory, they use that theory to make a testable hypothesis, and then they test that hypothesis on a subset of a population. One test is not definitive proof of the theory, and a study will only look at a tiny slice of what the theory is talking about. Then it’s up to people to look at multiple studies and see if the theory is still valid.

HRC’s Ashland Johnson, in the exact same statement as GLAAD, decided to make a contradictory argument about the study: “Imagine for a moment the potential consequences if this flawed research were used to support a brutal regime’s efforts to identify and/or persecute people they believed to be gay.”

Wait, I thought that their position was “Technology cannot identify someone’s sexual orientation.” Now it can, and it’s dangerous that it can?

Also, Wang and Kosinski address this: they used publicly available information, common software, and techniques that people working in the field are already familiar with. They invented nothing new, they just set out to show what things that are already out there can do.

So instead of giving brutal regimes tools to attack gay and lesbian people, they’re giving us a heads up that these tools are out there.

HRC and GLAAD made a list of all the things they didn’t like about the study. They’re… obviously not familiar with how research works.

The study did not look at any non-white individuals.

Wang and Kosinski said that they didn’t find enough pictures of non-white people for their study so they focused on white people only. It’s a choice I questioned in my post yesterday, but there might be a valid reason for it. I don’t know enough about how facial recognition programs work to know if this is an issue.

Either way, though, it’s not a reason to dismiss the research. If a scientist studies a specific species of salmon and produces results that cannot be generalized to all fish, that’s fine, and that’s still useful. This is one study, and there will probably be more to come.

The study did not independently verify crucial information including age and sexual orientation, and took at face value information appearing online.

The study was not peer reviewed.

According to The Economist, the study is set to be published in the Journal of Personality and Social Psychology, a peer-reviewed publication owned by the American Psychological Association. The journal is also ranked 3rd out of 62 psychology journals evaluated by Journal Citation Reports.

If GLAAD and HRC have evidence that The Economist is wrong in its reporting, they should present it.

The study assumed there was no difference between sexual orientation and sexual activity, which is incorrect.

Usually, when people in the US in 2017 talk about sexual orientation, they are talking about attraction. Think about it: we generally agree that someone can come out as gay before they have sex (so behavior isn’t the standard), and “coming out” – as opposed to “becoming gay” – implies that sexual orientation exists independently of someone’s identity.

Contrary to what HRC and GLAAD wrote, the study did not look at people’s “sexual activity.” Instead, it looked at who they said they were interested in on their dating profiles. This is somewhere between attraction (who they wanted to have a relationship with) and identity (what they wanted others to know about them).

This isn’t a perfect way of defining sexuality, but there is no perfect or correct way to do it. And, if HRC and GLAAD don’t like it, then they can think of it as a proxy for whatever their preferred definition of sexual orientation is, unless they have evidence that a significant number of people are just clicking that they’re interested in “men” or “women” for no reason at all.

The study assumed there were only two sexual orientations — gay and straight — and does not address bisexual individuals.

This is just not true. Wang and Kosinski studied two sexual orientations; they never said others don’t exist.

Again, it’s like the scientist who spends her life working on a specific species of salmon – would anyone accuse her of assuming that other fish don’t exist?

The study only looked at out gay men and women who are white, of a certain age, and are on dating sites. It is not surprising that gay people (out, white, similar age) who choose to go on dating sites post photos of themselves with similar expressions and hairstyles (one of the characteristics according to the study).

Also, the researchers tested their model on Facebook pictures and found a similar degree of accuracy. So it’s not just dating sites, and I’m beginning to think that no one at HRC or GLAAD bothered to actually read the paper.

The research states: “Outside the lab, the accuracy rate would be much lower” (the lab = certain dating sites) and is 10 points less accurate for women.

So “the lab = certain dating sites” is the opposite of true.

Also, the model is less accurate for women… that’s something that everyone reporting on this has acknowledged. So what? The point of research is to present what scientists find, not what someone thinks they should have found.

The study claims to detect gay men from the pool of photos on the dating sites with 81% accuracy.

That’s just not the same thing.

Even if this were true given the aforementioned flaws, it still means that heterosexual men could therefore be identified as gay nearly 20% of the time.

First, this is false because the model isn’t “identifying” anyone, it’s assigning probabilities.

So, yeah, their model can’t predict with 100% accuracy whether someone is gay or straight. That wasn’t the point. And Wang and Kosinski even include a several-page discussion of this that HRC and GLAAD would have known about if they had read the paper (starts on page 31).

The study reviewed superficial characteristics in the photos of out gay men and women on dating sites such as weight, hairstyle and facial expression.

This point is incomplete because, while “superficial” characteristics were analyzed, other, more permanent features of people’s faces were also analyzed, like the shape of the jaw and nose length. The study was about visual information in people’s photos, and that includes any sort of visual information.

But… so what? The researchers were trying to find out what features gave information about someone’s sexuality. There is no “If you can change it at a beauty shop, then it doesn’t count” rule.

Stanford University and the researchers hosted a call with GLAAD and HRC several months ago in which we raised these myriad concerns and warned against overinflating the results or the significance of them. There was no follow-up after the concerns were shared and none of these flaws have been addressed.

Again, no, not true, and they would know that if they had read the paper.

Page 31 includes a long discussion that starts with “Importantly, we would like to warn our readers against misinterpreting or overinterpreting this study’s findings.”

On pages 32 and 33, there is a long paragraph that evaluates some of these specific criticisms and how they would affect the results of the study. So the “flaws,” such as they are, were addressed.

I honestly don’t know why HRC and GLAAD have such a problem with this paper. Part of it is probably the science illiteracy evident in their statement, as well as a lack of familiarity with how research works. That last paragraph suggests that it might be a power or recognition issue as well: “How dare you publish your results even though we had problems with your research!”

But I can’t help but feel like this is part of a general angst about relating biology with sexual orientation, something that comes up often in discussions of sexuality, especially among people who are involved in LGBTQ activism.

When it comes to politics, I agree. Who cares why people are queer, we should be treated like everyone else.

When it comes to science, though, I can see that there is a reason to be curious here: gay, bi, and straight people exist in every culture and in many time periods that we have evidence about. That implies that sexual diversity has a biological component and that it gives humans an advantage when it comes to survival. And if it doesn’t, well, then that raises even more questions.

Ten years ago I was writing articles about silly studies linking sexuality to biological traits (remember the hair whorls? Those were bad times for the science of sexuality). I remember some people being really excited to find a biological link for sexuality at the time, so they were willing to believe anything.

The opposite position isn’t a corrective, though. Instead, we should take a stance of curiosity instead of judgment.

This is just one study that looked at one sample and said a few things. There will be more studies later on that will say other things. Let’s see how that all unfolds before deciding what the correct answer is.

Why Donald Trump and other conservatives deny climate change