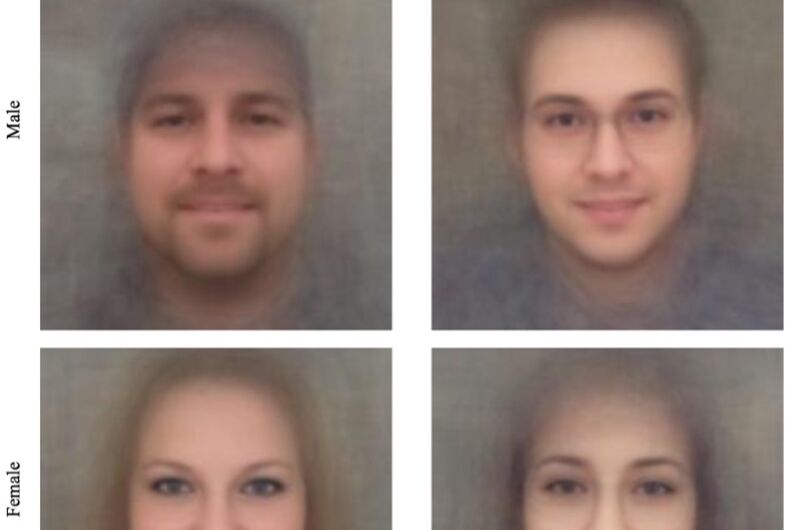 Two researchers published a study that showed that computers can see whether someone is gay from their faces with surprising accuracy.

Michal Kosinski and Yilun Wang used about 35,000 images of people from an American dating website (they don’t name the site). About half were men and half were women. Half the men and women identified as gay, the other half identified as straight.

Also, the images were all from white people between the ages of 18 and 40, and people who did not look like the gender in their profiles (according to workers hired by the researchers) were excluded. Bisexual people were not included in the study. The pictures were cropped to focus on the face, and the faces were fully visible.

They plugged those images into Face++, a program that analyzes and recognizes faces, in order to develop a model that could assign a probability that someone is gay or straight, depending on hundreds of traits that the program found in people’s faces.

Using the 100 images most likely to be gay and straight for both men and women, they created composite face images.

The most informative traits were both things that can be easily controlled by people and things that can’t. Lesbian women had larger jaws and narrower foreheads than straight women, and they were also more likely to wear hats and not wear make-up in their pictures. Gay men had narrower jaws and longer noses than straight men, but they also were less likely to have facial hair.

So can computers tell who is gay now?

Still, with more images to train on, better quality images, and better computer programs that will be developed in the next few decades, this could change.

Does this mean people are born gay?

Wang and Kosinski mention this in relation to the theory that sexual orientation is set in the womb based on hormones that fetuses get exposed to. If a male fetus gets exposed to fewer androgens (hormones that include testosterone) than average, then it might turn out to be a gay boy, and the reverse for female fetuses.

Considering how some of the identifying features are clearly not the result of fashion choices – like the width of the forehead, the length of the nose, and the shape of the jaw – it certainly supports the idea that sexual orientation is linked to early development. The study also found that gay men’s faces were more like women’s faces than straight men’s faces, and lesbians’ faces were more like men’s faces than straight women’s faces, which also suggests that sexual orientation is related to the development of biological sex.

What about people of color?

An interesting little piece of data in this study is that gay men had lighter skin than straight men. Wang and Kosinski suggest this could be related to exposure to the sun (gay boys are the “indoor recess” crowd) or testosterone (which is linked to melanin production), but consider a third possibility: gay men are less likely to identify as white compared to straight men.

We tend to think of race as an immutable characteristic assigned at birth based on someone’s ancestry. But a lot of people exist in complicated positions in America’s racial classification system and they make choices about their race, mainly because they live in a culture that tells them they have to choose one word to describe where hundreds of ancestors came from, how they understand that ancestry, and how others see them. When people change their racial identity between Censuses, it’s pretty clear that there is some choice in the matter even if people aren’t going full Rachel Dolezal.

So it could be that gay men who are at the edges of whiteness – Hispanic gay men, biracial gay men, etc. – are more likely to check the other box than their straight siblings because they already feel like they’re outsiders.

That said, race is a social construct and it would have been interesting if the study had included all races. While Wang and Kosinski say they didn’t have enough pictures of gay people of color to do separate studies on them, a broader sample that includes all races would have avoided differences in racial identity.

The most obvious issue raised here is how this technology can be used to violate people’s privacy. As Wang and Kosinski point out, they used pretty common software and techniques that are known to people who work with this kind of data. They didn’t develop anything new – they just showed what could be done with stuff that’s already out there.

Considering how many pictures people put online, even in professional contexts like on LinkedIn, a better version of this software could be used to out people.

While that might be terrifying to some people, it’s also important to remember that there are other oppressed minorities out there who are easily recognizable, so being easily seen as gay won’t put us in new territory. Also, if straight people could see how many gay people they already know, it would do a lot to change attitudes.

Either way, the technology isn’t going to go away because we’re afraid of it, so the most we can do is to reduce homophobia as much as possible.