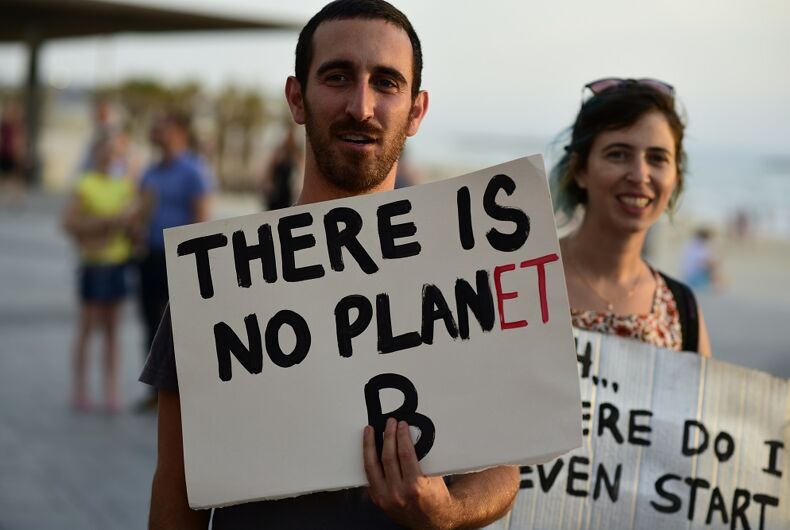 May 22, 2017: Democrats and Israeli environmental activists protest against Donald Trump In front of the US Embassy in Tel Aviv.Photo: Shutterstock

Only after the last tree has been cut down,

only after the last river has been poisoned,

only after the last fish has been caught,

only then will you learn that you cannot eat money.

Only after the last corporate building has blown down,

only after the last corporate beachfront property has been washed away and submerged,

only after the last private insurance company has perished under the weight of natural disaster payouts,

only then will you cease denying the human causation in global climate change.

No, President Donald J. Trump is not personally responsible for Hurricanes Harvey and Irma!

Yes, hurricanes have most likely ravaged the planet since prehistoric times!

What we are experiencing with increasing frequency, however, is the unprecedented intensity and duration of our planet’s climatic conditions. For example, Hurricane Harvey dumped more rain on Texas alone than any past storm in the history of meteorological record keeping, and Irma remained a category 5 hurricane longer and, also, clocked the highest sustained winds of any Atlantic hurricane ever, caused, in large part, by extraordinarily high Atlantic water temperatures.

By examining Harvey and Irma, we are witnessing our future. Today, meteorologists use terms like “unprecedented” and “historic” in describing the component conditions of these two climatic events. Tomorrow, we will hear them defining similar storms as “normal.”

How many years into the future will it take for climate scientists to increase the ratings of hurricanes to “category 6” or “category 7,” which would indicate that these storms are six or seven times as intense as those of category 1?

The Obama administration conducted an extensive study, its National Climate Assessment, which found conclusively that our global climate is, in fact, changing, and this is due primarily to human activity, in particular, to the burning of fossil fuels.

The Assessment investigated approximately 12,000 professional scientific journal papers on the topic of global climate change, and it discovered that in the articles expressing a position on global warming, fully 97% authenticated both the reality of global warming and the certainty that humans are the cause.

Additional studies report that we will be experiencing more category 4 and 5 hurricanes, and the beginning of the depletion and ultimate total collapse of glaciers in Antarctica, which can continue to raise worldwide sea levels an additional four feet. This depletion is now irreversible.

Not knowing is bad. Not wishing to know is worse.

What seems obvious to the scientific community seems like science fiction to many key politicians, including Donald Trump and members of his administration.

Trump pulled the United States from the Paris Agreement on Climate Change, severely gutted regulations on corporations and industries that seriously pollute our water, air, and ground, while reemphasizing fossil fuels and deemphasizing clean energy sources.

He chose to head the Department of Energy former Texas Governor, Rick Perry, who admitted he was unaware of the function of the department he was to administer, and who, in his infamous “oops” moment during his run for the presidency in 2012, actually forgot that this was one of the three federal agencies he intended to eliminate.

To “lead” the Environmental Protection Agency, Trump picked Scott Pruitt who contradicted reliable scientific evidence when he stated he doubts that carbon dioxide is a primary contributor of climate change: “I think that measuring with precision human activity on the climate is something very challenging to do and there’s tremendous disagreement about the degree of impact, so no, I would not agree that it’s [CO2] a primary contributor to the global warming that we see.”

This aligns with Trump’s statement on the campaign trail calling climate change “a hoax” perpetrated by the Chinese, even though the EPA’s conclusion on its website states (before Trump had the agency delete it) that, “Carbon dioxide is the primary greenhouse gas that is contributing to recent climate change.”

In his brief time in office, Trump has declared war on the environment by proposing a substantial budgetary reduction of an estimated 24% and a staff cut of 20% to the EPA, consideration of lower automobile emission and fuel efficiency standards, relaxation of prohibitions against dumping toxins like coal ash into streams and rivers, reinstatement of the potentially environmentally damaging Dakota Access and Keystone oil pipelines, and increased coal mining, natural gas, crude and scale oil drilling.

In his recent wide-ranging executive order, he further reversed Obama-era environmental protections by reducing governmental regulations on the coal and oil industries that were intended to curb greenhouse gases. Specifically, Trump repealed Obama’s moratorium on coal mining on federal lands and on coal-fueled power plants, and advised federal agencies to “identify all regulations, all rules, all policies…that serve as obstacles and impediments to American energy independence.”

Against mountains or irrefutable evidence to the contrary, the climate deniers, including Donald Trump and significant numbers of his Grand Old Party are perpetrating a delusional fraud against volumes of reputable evidence to the contrary that if allowed to continue, will end in the extermination of all life on this planet (except, or course, cockroaches who seemingly survive almost anything).

So what major factors keep conservatives (who oppose conserving our environment) in perennial denial with their heads buried in the increasingly toxic sands?

Conservatives have a vested interest in denying the human-related causes of global climate change, since to do otherwise would impose a sort of narcissistic injury upon themselves that would challenge their entire political philosophy, and, also, the money in their political war chests given by corporate lobbyists.

While differing marginally on specific issues, many Republicans march in lock-step to the drummer of conservative political and corporate dogma centering on a market-driven approach to economic and social policy, including such tenets as reducing the size of the national government and granting more control to state and local governments; severely reducing or ending governmental regulations over the private sector; privatizing governmental services, industries, and institutions including education, health care, and social welfare; permanently incorporating across-the-board non-progressive marginal federal and state tax rates; and possibly most importantly, advancing market driven and unfettered so-called “free market” economics.

In truth, the conservative Republican battle cry, seemingly coined by Sarah Palin, of “drill baby drill,” unfortunately is what Trump is pushing, and ironically, as the Obama administration before him forwarded, resulting in significantly more domestic oil and gas production through “fracking” than under the George W. Bush administration.

This, however, is simply unsustainable since, in the words of President Obama in 2012: “But you and I both know that with only 2% of the world’s oil reserves, we can’t just drill our way to lower gas prices – not when we consume 20% of the world’s oil.”

A non-regulated privatized so-called “free-market” economic system lacking in environmental protections for our air, our water, our climate, our land, and our animals is tantamount to a social system absent of civil and human rights protections for our people.