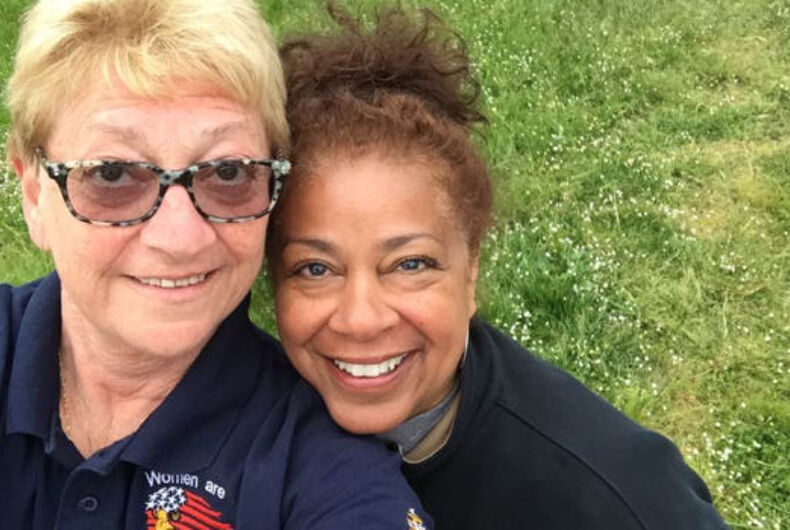 Calvary Church in Friendswood, Texas has a strange way of showing God’s love. As the community rebuilds from the devastation caused by Hurricane Harvey, the church has “fired” a volunteer and donor after finding out she’s a Jewish lesbian.

Carmen Hix, a Navy combat veteran, documented her experience with the church on social media. She says she donated $500 worth of food to the church’s food bank and took a week off work so she could assist folks in need following the hurricane.

After three days of volunteering, she says she was called into an office to meet with the church’s pastor, Ron Hindt. He asked why she said “Shalom” after every prayer and she told him she’s Jewish, she was asked to leave and not return.

“I thought they wanted to talk to me about further volunteer efforts,” Hix told OutSmart magazine. “I was so unprepared for the conversation that ensued.”

When she got home, she called the church to give them a piece of her mind. The pastor invited her to meet him at the church and she agreed – only to be treated with more disrespect. Instead of an apology, she was grilled over “rumors” that she is a lesbian.

Nix and her partner of 20 years have raised two children together. When she confirmed the facts about her loving relationship, she says Hindt told her, “We can’t let you represent our church, as being a lesbian is a sin.”

After Nix posted the story on Facebook, Hindt responded on the social media platform. The message has since been deleted.

“Recently, a resident of the community volunteered to serve with us and we wholeheartedly accepted her assistance. Unfortunately, we’re saddened by an incident involving some miscommunication that took place off campus in an exchange between various community volunteers at the church’s food pantry,” Hindt wrote. “I met with the individual who was upset and apologized for the misunderstanding. (I apologize once again if you are reading this.) I invited her and her partner to sit with my wife and I in church this Sunday.”

Nix, however, says the offer wasn’t as benign as it sounds.

“He invited my partner and I to come to his church and the spirit of the lord would show me the evil of my ways and would change my heart to realize that my 20-year relationship with my wife was a sin,” she wrote on Facebook.

SO! I have volunteered for the past few days tirelessly, working at the food pantry at Calvary Church, as it is close to…

THIS WAS POSTED ON THE CALVARY WEBSITE IN RELATION TO MY ISSUE: "As you know, Calvary Houston has been providing…