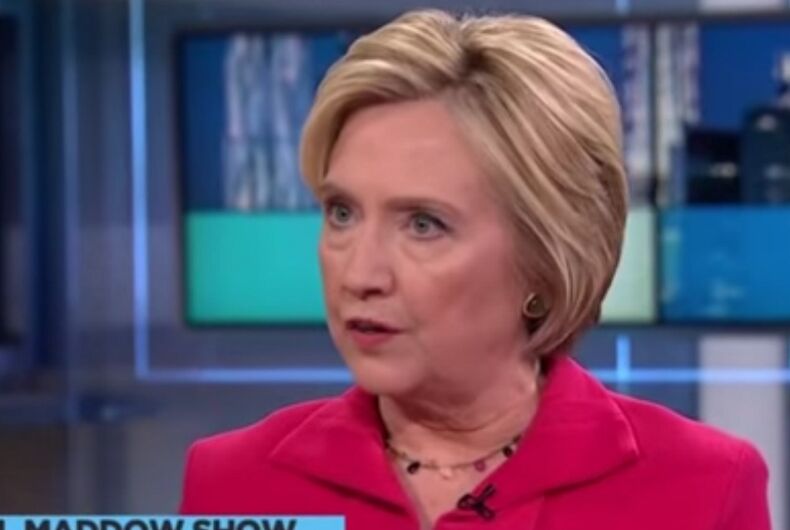 Hillary Clinton appeared on The Rachel Maddow Show yesterday and she ripped into Donald Trump.

Clinton is back in the public spotlight this week with the release of her new book, What Happened. While other interviews have focused on her campaign and the election last year, Rachel Maddow wanted to know what Clinton thought about how Trump is doing.

The conversation starts with North Korean missile testing. Clinton said that Trump is being “played” by North Korean dictator Kim Jong Un. “This missile test[…] is sending a message from Kim Jong Un that he is not deterred,” the former Secretary of State said.

“[Diplomacy] needs to be happening right now. Get over the Twitter stuff,” she added.

Maddow then brought up reports that Trump mocked Attorney General Jeff Sessions so badly that he wrote a resignation letter. Clinton said that Trump “delights” in insulting and humiliating people, and that his understanding of power makes him dangerous.

“This president, and some of the people around him, pose a clear and present danger to this country.”

When Maddow asked Clinton about the constant “Lock her up” chants at Trump rallies, Clinton said that she’s not worried about being prosecuted as much as she’s worried about an elected official threatening his political opponents with jail time. “Trump admires authoritarians. He doesn’t just like Putin, he wants to be like Putin.”

They also talked about the on-going investigation into Russian involvement in the 2016 presidential election and Trump’s inexperienced and “superficial” pick for Secretary of State.

The whole interview is worth watching. It’s not often that a career politician says that the president needs to be “contained.”

Not so hot now: One of the viral cops from Florida is a disgusting anti-Semite