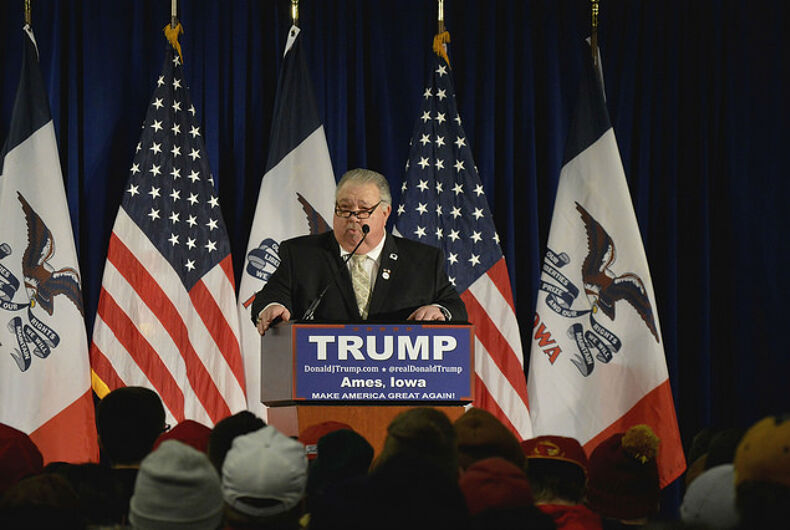 President Donald Trump has nominated a number of anti-LGBTQ individuals to his Cabinet, but his latest pick might set a new standard of awfulness.

Sam Clovis, a birther and climate change skeptic tapped to be chief scientist for the Department of Agriculture, and current senior White House adviser to the USDA, believes that granting rights to the LGBTQ community could lead to legalizing pedophilia. He also believes being gay is a choice.

We think being bigoted and ignorant is a choice.

CNN’s KFile investigation team reviewed Clovis’ writings, radio broadcasts, and speeches, to uncover the full extent of his unscientific worldview and his tendency to spew homophobia.

Clovis has repeatedly argued that the science on homosexuality is unsettled and that “LGBT behavior” is a choice. The American Psychological Association has said that while there is no scientific consensus on the causes of sexual orientation, “most people experience little or no sense of choice about their sexual orientation.”

Clovis also claims LGBTQ people don’t deserve 14th amendment protections, comparing the community to blue-eyed and left-handed people, as if there was an entire anti-blue-eyed or anti-left-handed movement actively trying to hold them back as second hand citizens.

From a 2011 blog post for The Iowa Republican, Clovis argues the following:

[T]he only way to extend 14th Amendment protections to those in the LGBT lifestyles is if these behaviors are genetically mapped or otherwise discernible. The science on this issue seems to be uncertain, and if one followed the arguments from plaintiffs, the issue argued was that these individuals, because of ‘love,’ should be allowed to ‘marry just like opposite-sex couples.’ What is it really? Is this about genetics or about emotions? The stronger case is genetics, but that is not the argument being advanced. If LGBT adherents were genetically predisposed, then one must ask why a segment of the population that constitutes numbers less than one third of those who might be left-handed or one fourth the number who might be blue-eyed or one eighth the number who might be genetically predisposed to obesity should receive 14th Amendment protections when others are not even considered. Certainly left-handers have more to bark about than most. Thus, the argument must be about something other than genetic predisposition.

He doubled down on this rhetoric at a campaign stop during his failed campaign for the Republican Senate nomination in Iowa in 2014, saying the “science was still out” but that “”as far as we know” being LGBT is choice.

Making a “slippery slope” fallacy argument so often favored by intellectual dullards and the dishonest, he worries what will come next:

Clovis also wrote in favor of “religious freedom” laws that give a license to discriminate, writing on his blog in 2012:

So what of it, Gays For Trump? You still on that train? Because don’t look now, but they’re tying you to the tracks.