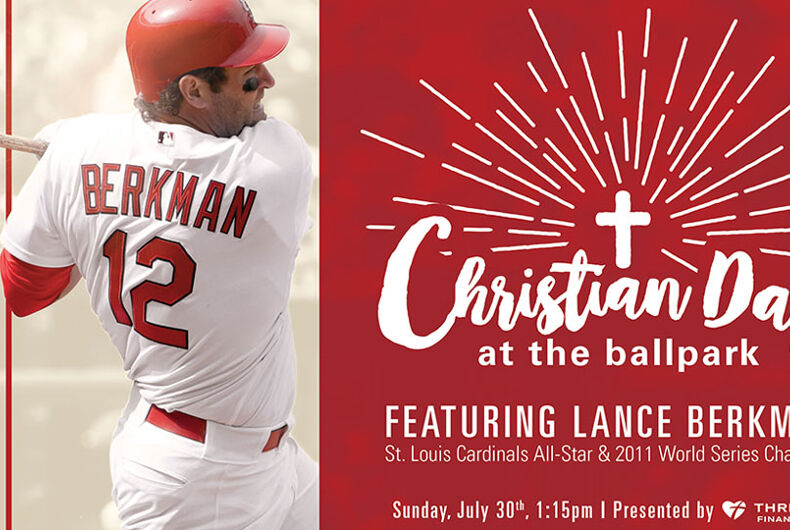 LGBTQ sports publication Outsports has reported from some of the biggest sporting events in the world, but recently had their press credentials denied for the first time in its 17-year history while trying to cover Christian Day at the ballpark.

The St. Louis Cardinals hosted the event on July 30, coinciding with their game against the Arizona Diamondbacks.

Reporter Erik Hall said he attempted to get credentials first through Outsports, and then through SB Nation, the publication’s parent company. He was unsuccessful in both attempts, and the response he received suggests the Cardinals were afraid of them covering the event.

It was suggested that he purchase a ticket if he wished to go to the game, so he did.

What he discovered was surprisingly mild. What were they hiding? Not much.

Outsports was interested in the event primarily due to its inclusion of former player and anti-LGBTQ rights campaigner Lance Berkman.

Berkman appeared in an ad against Houston’s Proposition 1, in which he stated that transgender women are “troubled men who claim to be women.”

Berkman didn’t speak on LGBTQ issues during his remarks at the after-game event, getting closest by telling those in attendance to live in “obedience” to the Bible.

“Faith and obedience go hand in hand,” Berkman said. “You can’t have faith unless you’re walking in the way that God wants you to walk.”

Hall said he wanted credentials so he could ask the other speakers, including current players Zach Duke and Adam Wainwright, what they think of Berkman’s politics, and to ask their opinions on the LGBTQ community.

The Cardinals are hosting a Pride night event on Friday, the 25.

Outsports appears likely to try to get credentials to that event. Interestingly, this seems to put the team in the uncomfortable position of either proving the reasons given for keeping the publication out of Christian Day was a bunch of BS or face the bad PR of denying them from covering a night dedicated to the community they represent.