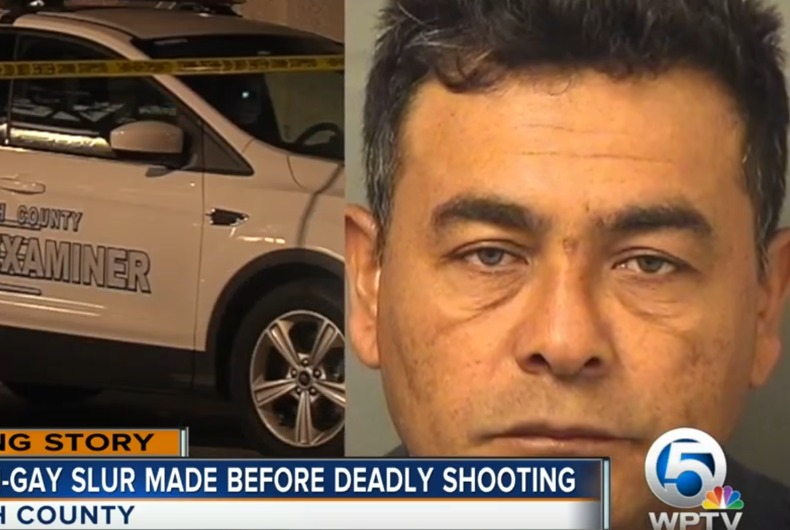 Juan Javier Cruz, 22, was standing outside the Las Flores restaurant in Lake Worth, Florida, with some friends late Saturday night, when he was shot to death by someone he had never met before.

Juan’s cousin, Pedro Cruz, asked a friend of Hernandez Mena for his phone number, and, according to witnesses, that’s when the 48-year-old started looking at the group with anger.

At one point, Hernandez Mena approached Juan’s group and started threatening them. “I hate you damned gays. I’m going to kill you all here,” he shouted, according to the sheriff’s report.

Hernandez Mena also allegedly said, “If we were in my country, I would kill all of you like rats.”

When Juan defended Pedro, Hernandez Mena took out a gun and fired several shots. He shot Pedro in the ankle and killed Juan.

Hernandez Mena told police that he fired the shots, but that he was attacked by a group of people. He also said that the “guy that died was not his intended target,” according to the sheriff’s report.

“He did it for no reason,” Juan’s cousin Brenda Carvallo told ABC25 News. “None of us know Nelson Hernandez.”

Pedro told WPEC that his cousin saved his life.

Hernandez Mena was arrested and is charged with first-degree murder, attempted murder, and aggravated assault with a firearm. He is being held without bond and the weapon has not been found.

The state attorney’s office has said it’s too early to say whether he will be charged with a hate crime.

MTV’s VMA ‘moonman’ trophy is getting a gender-neutral update